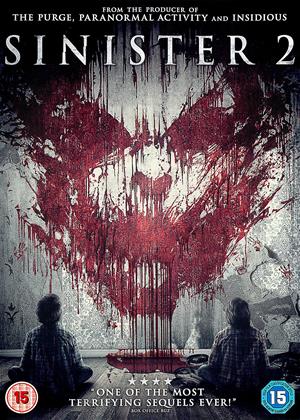 Synopsis:
Courtney (Shannyn Sossaman) and her twin boys, Zach and Dylan, have moved into a seemingly idyllic secluded old house in an attempt to start a new life. But the building has a secret: it is the scene of a gruesome ritualistic murder which bears a striking resemblance to a series of family slayings that have taken place over the past fifty years. A private detective (James Ransone) investigating the recent massacre of a famous author and his family is led to Courtney and her children, whom he believes will be the next victims.
As he pieces together the mystery behind the murders he uncovers an ancient myth that means the killer might be someone - or something - more evil than anything he could have imagined.
Actors:
James Ransone, Shannyn Sossamon, Robert Daniel Sloan, Dartanian Sloan, Lea Coco, Tate Ellington, John Beasley, Lucas Jade Zumann, Jaden Klein, Laila Haley, Caden M. Fritz, Olivia Rainey, Nicholas King, Michael B. Woods, Tory O. Davis, Howie Johnson, Grace Holuby, John Francis Mountain, Nicole Santini, Stephen Varga
Directors:
Ciaran Foy
Producers:
Jason Blum, Scott Derrickson
Writers:
Scott Derrickson, C. Robert Cargill
Studio:
E1 Entertainment
Genres:
Horror, Thrillers

For a story about a bereaved mother with two young sons, this could have been a lot worse. I have a low tolerance for bratty depictions of troubled youngsters in films like this, and the often dewy-eyed mother’s intense efforts in trying to ‘understand’ them. Luckily, that kind of drippery is in short supply here, with Director Ciaran Foy clearly more concerned with horror atmospherics.

For any unacquainted with the original, it is difficult not to notice how little explanation there is for events here. In some ways it is a good thing that we head straight into the thrust of the narrative, but in others it must be frustrating playing ‘the long game’ in order for newcomers to be enlightened about the ongoing story.

The main protagonist is Bughuul from the earlier film, who looks very much like the lead character in Top Cow’s ‘The Darkness’ comics. He makes surprisingly brief appearances here – such restraint is commendable, although it would have been nice to see a little more of him. Perhaps nice is the wrong word.

There are several story strands here, but sadly, only the evil ghostly children’s growing influence on young Zack (Dartanian Sloan) has any sense of progression. Other interesting elements, like Zack becoming the bully his father Clint (Lea Coco) was, and the father’s abusive behaviour towards the likeable Courtney - as well as her relationship with the ‘Ex-Deputy’ - are plot-threads presented more or less in isolation amidst everything else, and they remain severely under-developed and subsequently not as interesting as they deserve to be.

Despite the convincing acting, I feel that too much reliance is placed on the young cast members. It is too much to ask that scenes of such horrific ‘weight’ to them should be adequately conveyed by the juniors.

The highlight for me here is Tomandandy’s amazing, doom-laden score. Throughout, the music adds an extra layer of intensity and dark foreboding. The soundtrack is available to buy and makes for pretty unsettling listening on its own.

Part of what made 2012’s Sinister a sleeper horror hit was its original premise that came with discovery and surprise. It engaged by letting the audience follow along with the creepy legend of Bughuul, the faceless demon that takes the souls of children and leaves behind old movies of murders. Now that we’re familiar with Bughuul’s tactics for keeping the abduction and murder train constant, there has to be something more to its premise rather than just offer up a new slab of meat for the same old cleaver. And while it doesn’t exactly reinvent its own wheel, Sinister 2 does offer up some new perspectives to keep the series just a tad fresh.

This time we get to see the workings of Bughuul from the perspective of the kids, both human and ghost. Brothers Dylan and Zach can see the children chosen by Bughuul that actually talk to them rather than just stare blankly in the shadows. The spooky kids - pale and veiny as your ghost kids appear - choose Dylan to be in their group of family murderers. He doesn’t exactly want to be initiated, but they don’t give him much a choice. Dylan is plagued by foreboding nightmares until he actually comes down to the basement and watches the 8mm movies of children murdering their family. If he doesn’t watch their sick productions, more nightmares follow and Bughuul starts to get angry. What does the long-haired boogieman do when he gets too steamed? Your imagination can fill in that blank.

While the previous film was more about the investigation than the family, Sinister 2 attempts to weave more of a family drama into mix. Dylan and Zach live out in the country with their mother Courtney (Shannyn Sossamon), fleeing from their abusive father. The angry dad, demanding his kids, makes for a more frightening figure than Bughuul with his violent outbursts and the effect he leaves on the family. Dylan has grown fearful, Zach grows bitterly jealous and Courtney becomes a mess the way she struggles to keep her boys safe. Bughuul’s terror is the least of their problems, but it does give the kids much more to do than just be victims.

The only returning character to keep this franchise serialized is Deputy So & So (James Ransone), still saddled with that name in the credits. Having been terminated from law enforcement, So & So has devoted all his energies into tracking and stopping the reign of Bughuul. He’s a likable enough guy that ends up getting involved with Courtney’s problem when their country house turns out to be the last site of a murder. As the legend goes, Bughuul’s influence follows from house to house after each family moves away. Thus So & So struggles to keep the family in the house as the next location will be their last - at least until he can catch up and learn everything we already know from the previous film.

Whereas the last movie seemed to be aiming for a PG-13 rating it never received, Sinister 2 really goes for the R this time around. There are plenty more 8mm deaths that the ghost children are eager to show off for Dylan and they’re all quite brutal with heavier scope. Without giving too much away, there is one very disgusting murder that involves rats and hot coals. And unlike Ethan Hawke’s character that continued to watch these films out of interest in the subject, Dylan is thoroughly disgusted by these movies. He knows they are wrong and is only watching them out of peer pressure from his only friends in the secluded countryside. Dylan looks away and the kids force him to watch some more.

While Scott Derrickson co-wrote this sequel with his original partner in crime C. Robert Cargill, he has handed over the direction of this sequel to Ciarán Foy (Citadel). Foy does his best to encapsulate the tone of the previous film with the 8mm footage and the effective jump scares, but there are a few moments that are not quite as terrifying as they could be. The nightmares, for example, are all shot very quick with tilted angles. They don’t feel as frightening as they should be. And while I applaud the screenwriters for the perspective they gave to another batch of Bughuul victims, it would have been nice to see some of these character arcs culminate better. Throughout the film we see Dylan bullied by both his father and Zach, but never receive that vindicating moment where he grows past his wimpy approach to a safe life. The film also teases us with a hefty amount of foreshadowing that you start quickly piecing the ending together sooner rather than later.

While Sinister 2 doesn’t reach its full potential, there is still some originality to the second outing of the series. There’s an interesting commentary on sadism that while never completely examined does present a unique story element. James Ransone is no Ethan Hawke, but he certainly has the charisma and character to carry on this franchise if he is indeed going to be the vessel for this world. But if he is going to be our reprising character, can he at least receive a better name in the credits? Moving from minor role Deputy So & So to leading role of Ex-Deputy So & So doesn’t seem like much of an improvement.