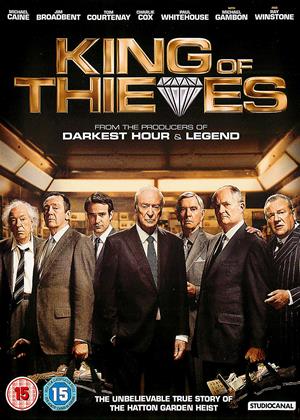 Reviews (8) of King of Thieves

I enjoyed this film. Yes,, it's slight and yes, we know the ending because it happens as the news story was famous (in the UK anyway).

But it's a nice enough watch, with some old con characters played by loads of white men (which I enjoyed in this age which activetly discriminates against them and parachutes in women and ethnic minorities in absurd roles).

Michael Caine must be 85. Tom Courtney 80. Others here like Paul Whitehouse and Ray Winstone only 60.

They use footage from their old movies a bit near the end, which is fun.

However, the film SEXY BEAST is way superior - it also features and heist and also features Ray Winstone, and Ian McShane who wouldn't have fitted in here too.

SO my advice is to watch the 2 movies back to back. This first, then the 5 star SEXY BEAST.

I think that overall I prefer the earlier "The Hatton Garden Job" film, but to be fair King of Thieves has a better cast, some good lines, and is probably more true to life, being a bit grittier and darker than the earlier film.

Quite good - King of Thieves review by SC

Quite enjoyed this one, there is quite a bit of swearing, but I guess as it's Criminals and Londoners I guess to be expected

Will we Ever Know the Who Youngster Was? - King of Thieves review by KW

Great performances from a stellar cast of British actors, creating their version of the Hatton Garden robbery, but the enigma of it is, who was the youngster compared to the rest who persuaded the Michael Caine character to do the job and got away with what in cash, gold and jewels?

Surprisingly dull given the stellar cast! - King of Thieves review by CS

Given the stellar cast and famous faces in this, I was surprised how dull and boring it actually was! I would have expected some top quality acting given whose in this and whilst the cast do appear to try and pull it off (no pun intended), they fail miserably, because the script, direction and production simply aren't up to the job! I personally would recommend the far superior 'The Hatton Garden Job' from 2017, which is a far superior and better made film in every way!

Well structured and filmed with a stellar cast of seasoned actors with immense skills. Michael Cane was mesmerising, as ever, but all were superb and the storyline was both informative and tense,but with a great and funny script

A waste of great talent - King of Thieves review by IT

Michael Caine is one of my favorite actors, so I anticipated that him combined with an excellent supporting cast would be a treat.

Unfortunately, I found the movie utterly boring, unlikable. and dumb.

For a start, the heist has all the complexity of a bunch of schoolboys finding a shop door open and nipping into to steal sweets. The supposedly seasoned criminals are utterly oblivious to CCTV cameras - which leads to the police identifying them very quickly. I think the movie title should have been The Incompetents.

Worse still, I found, was that the early camaraderie between the "old friends" suddenly turns nasty and diminishes into backstabbing. Surely if these people knew each other as well as we are to be believe, they could never have trusted each other to begin with..? Then, bizarrely, at the end of the film, after being caught, the crooks are all best friends again. I was baffled!

I don't know how closely the story is based on the real life incidents and how much has been fictionalized, and I'm not interested in finding out. All I know is that I wasn't entertained - I was bored and hated the movie.

Check out the original Italian Job instead!

King Of Heist Movies - King of Thieves review by Spoons

I just can't understand why the snobby critics gave this film poor reviews. I can sum it up it two words....Absolutely brilliant. From a great cast to wonderful dialogue and some really clever touches and nostalgic winks (you'll know when you see and hear them). Ignore the reviews and watch this if this is your sort of movie.

King of Thieves is bound to cause some confusion. Wasn’t Michael Caine just in an old-people heist movie? That was Just Getting Started and the only key difference between the two is that King of Thieves is a more traditional, brass tacks heist picture, more clinical than screwball. It’s a standard and by-the-numbers crime picture that it was most likely a walk in the park for Caine, being no stranger to this genre at all. For the audience having followed him for this long, it’ll also be a familiar stroll.

It is at least pleasing that a capable cast has been strung together for such a picture. Jim Broadbent brings his usual charming self to the screen, stammering and struggling to articulate with great warmth. Tom Courtenay has a certain dignity that doesn’t feel diminished within such a lacking script. Michael Gambon still has his quirkiness in tact after his Harry Potter days to still a hold a scene. And there’s just something so enduring about Ray Winstone that brings a bit of a spark to any film.

You may have noticed that the cast I just listed are all old and the script hasn’t forgotten this. This is why I’ve yet to mention the story because it’s honestly the most boring part of the picture. Essentially, a collective of old guys are getting over the hill and decide to pull off one last heist because, hey, why not? Michael Caine has been doing this a long time, both his character in the film as Caine as an actor. It’s a typical heist picture, through and through. A collective of elders stage their plan, briefly discuss being old, team up with a younger cohort, make their break into a vault, and then bicker about what to do with their loot.

I’m not too disappointed in this picture considering it plays about as expected. But perhaps there could be something more here. I mentioned Just Getting Started, a film I actually dug because Caine and company are portrayed as being amateurs in robbery, a unique turnaround from Caine’s usual forte. But in King of Thieves, he’s among others who appear to have been doing this kinda thing for the longest time. I couldn’t help but feel maybe they’d be worn enough to see the cliches tacked on the wall and willingly try to avoid the usual steps. Then again, the film also wants to pose them as being old and lacking in health so maybe they’re just tired. They’re too worn to subvert this genre and treat it more as a jog around the block to flex those acting muscles a bit.

King of Thieves serves as little more than aged actor showcase that it’s disappointing it’s dished out through a paint-by-numbers heist picture. I loved seeing all these actors together but it just looks as though they’re begging for a better line or a more insightful story. In the same way that The Expendables was a walk in the park for action icon, this film is an amassing of top British talent that is little more than that.