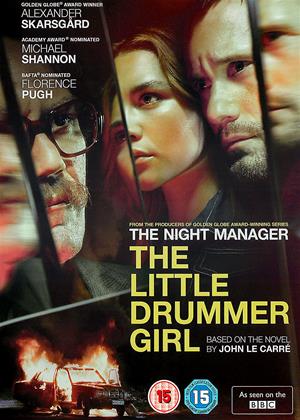 Reviews (2) of The Little Drummer Girl

This is quite a recent film (2018), but it could have been made anytime since the Munich Massacre, to which it refers briefly. In some ways it feels older as the Palestinian question has been supplanted by Muslim Extremism now, but the Israel/Palestine conflict goes on, we have just become desensitised to it. Ostensibly it is written from a Western perspective, the Palestinians are terrorists and the bad guys, the rest of us are the good guys and do no wrong. Superficially the plot follows this line, but if you pay attention and think behind the words it is not that clear cut. The Palestinian rebels are portrayed sympathetically and it is possible to understand their cause. The film does refer to the role of the British in creating the problem in the first place. It is human to ignore ones own provocation and complain that the other side started it, "unprovoked retaliation?".

I never did understand the title, there is a reference in the film to a drummer boy, in about the fourth or fifth episode, but this didn't explain it for me. Never mind the title, it has to have one; it is an exciting enough thriller. You do have to pay attention at the beginning and follow which character is which, but this is not too difficult. Some films make this harder by choosing actors or actresses which look alike. There is some of this here in that Gadi (Skaarsgard) and Michel look similar, but Gadi impersonates Michel in the first episodes, so this is a good thing. The heroine Charlie (Florence Pugh) is new to me but carried the part well. She doesn't look like a tough, action movie star, but then the Palestinians wanted someone who would pass as normal and not attract attention for the role they wanted her to play. The Israelis wanted her to be able to act the role of a wannabe terrorist. So she played this rather well, in a way the role was easy in that she had to play an actress at which she is obviously good. This is exemplified in the final episode when Khalil gets her to tell him the truth; contrast her performance here, when she admits to being an actress, against her earlier self assured behaviour.

In my view the film is cleverly made in that you can watch it which ever view you hold on the Palestinian question. I enjoyed it.

Well filmed and produced, I found the characters superficial and hard to believe in. The Israelis were accurately portrayed as ruthless thugs and the Palestinians as the underdogs fighting back. But I lost interest in the espionage theatre. Quite disappointing.