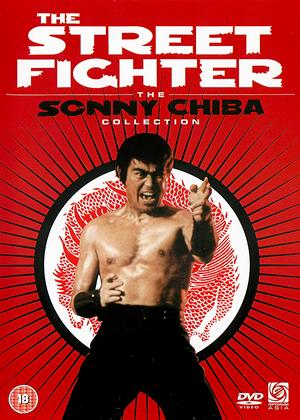 Reviews (2) of The Street Fighter

Sonny Chiba, Japan's answer to Bruce Lee, stars in this spectacular martial arts flick as the hero with dubious morals and a deadly karate. A gritty, raw and extremely violent film with amazing fight sequences and a wonderful 70s funky soundtrack with a Japanese flavour. Definetely not one for the squeamish.

It's very hard to rate films like this. As a mainstream movie it merits one star in every department except manic energy, but in terms of what it sets out to be, it's almost a masterpiece. The classic test of whether or not an actor makes a good James Bond is to ask yourself: "Do I believe this man would kill me?" Although in most other respects he'd be a dreadful Bond, I believe wholeheartedly that Sonny Chiba would kill me, and grin like the Joker as he stared at the vital organ he'd just torn out of my body with his bare hands, as he does in this film more than once. I do not have that feeling about Bruce Lee. It's also worth remembering that Sonny Chiba was so much bigger than life that he made manga movies 20 years before animé was a thing - check out his live-action performance as the unstoppable assassin Golgo 13.

Can he act? No, of course not. But when he pulls faces and makes funny noises in the middle of fights (is that actually a vital part of being good at non-cinematic martial arts, or just a deliberate attempt to remind us of Bruce Lee?), the feral quality he brings to all his films prevents it from being laughable. As does the hideous blood-soaked carnage he perpetrates, and his utter amorality which frequently crosses over into outright evil. The "plot", insofar as there is one, makes no sense whatsoever beyond being an excuse for people to hit each other. Women are treated abominably by everyone, including the "hero', who is quite a lot worse that most of the bad guys. The nicest person in the film is the incredibly annoying and utterly superfluous "comic relief" character, who is of course the person you most want to die from the get-go; fortunately it's no spoiler to reveal that in a film this dark and vicious, his chances of long-term survival are roughly equivalent to those of Jar Jar Binks getting his own spin-off trilogy.

But hey, if you want non-stop over-the-top demented seventies kung fu action with buckets of blood, and you don't give a spring roll about those subtle qualities that make a film good in the conventional sense, you'll absolutely love this! Nobody involved was ever going to win whatever Japan has instead of Oscars, but I certainly wasn't bored. And if I ever see anyone who looks like Sonny Chiba walking down the street, I'll walk in the opposite direction very quickly indeed.