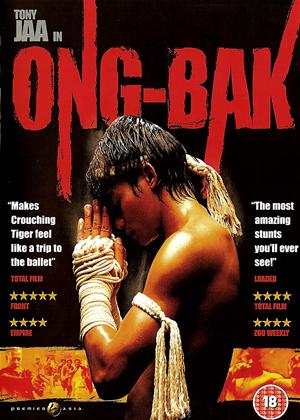 Synopsis:
Abandoned on the steps of a rural village temple shortly after his birth, Ting (Tony Jaa) grows up to become a master of Muay Thai and a hero to his people. Protected by a sacred power, he lives in peace with the only family he has ever known. Untill, one day, a single act of betrayal robs his village of its greatest treasure: an ancient and mysterious Buddha statue that brings health and prosperity to all who respect power. Now, with the future of his people lost to fear, Ting must sacrifice all he believes, and, single-handedly, overcome the might of a ruthless criminal empire, to win back their greatest treasure.
Actors:
Tony Jaa, Petchtai Wongkamlao, Pumwaree Yodkamol, Suchao Pongwilai, Chumphorn Thepphithak, Cheathavuth Watcharakhun, Wannakit Sirioput, Rungrawee Barijindakul, Chatthapong Pantanaunkul, Nudhapol Asavabhakhin, Pornpimol Chookanthong, Udom Chouncheun, Boonsri Yindee, Arirat Ratanakaitkosol, Woravit Tanochitsirikul, Chalongsak Sirimahasan, Sawang Rodnuch, Sutin Rodnuch, Woranard Tantipidok, Somjal Jonmoontee
Directors:
Prachya Pinkaew
Writers:
Prachya Pinkaew, Panna Rittikrai
Studio:
Contender
Genres:
Action & Adventure
Countries:
Thailand, Action & Adventure

The guy is quick. Agile. Unbelievable, just what all young lads dreamed of being when they watched "Kung-Fu" movies.

Ok film, but if you liked to see a martila artist do things beyond your imagination, then watch this. Some of his ariel moves are unbelievable. Just watching the speed that he can cover distance whilst in the air is jaw dropping. Watched many times just because I couldn't believe what he did, then I read the blurb about no wires etc.

"Freak" comes to mind, but in the nicest way, he seems to be the perfect physical human.

Move over Jackie Chan! Step aside Steven Segal! Even the muscles from Brussels, ol' Jean Claude himself should be ready to hand his crown over too the star of this movie.

Full contact (and yes that includes kicking someone in the mush with his trouser legs on fire!) real glass, real spikes, knives and a band saw and you have a movie whose fight scenes make the most action packed sequences in a Bruce Lee flick, look like the WWE!

It's a simple plot granted, but hey, forget about that, sit back and watch slack jawed as this film delivers blow after blow that will make you wince even as you watch in awe.

I hope Tony Jaa does another movie, and let's pray he doesn't kill himself in the process of doing it! Seriously exciting, exhillerating and wow, I am still in awe. Guess which DVD has now become a late entrant on my X Mas wish list?

I tried to like this film. I really did. But about halfway through I began to get seriously bored. Tony Jaa is certainly very athletic indeed, and I'm sure I'd lose a fight with him inside one second, but he doesn't have much acting talent beyond being quite good at scowling, which he does constantly whenever he's not hitting people or jumping over things. And after you've seen him leap high into the air and hit somebody else on the top of their head with his fists, elbows or knees twenty or thirty times, the novelty wears off, even when he tries to add variety by doing it with his trousers on fire. It doesn't help that every stunt they were especially pleased with is shown in slow motion twice, or even three times.

Muay Thai may be a highly effective martial art, but as a visual spectacle it's extremely repetitive, which is presumably the reason for an extended sequence lifted straight from a Mortal Kombat-type computer game, in which, for absurdly contrived reasons, our hero has to fight a succession of increasingly peculiar opponents, culminating in a chap called Mad Dog, whose fighting style consists of hitting his opponents with furniture. Which in turn becomes repetitive: after you've seen Tony Jaa get six or seven chairs and tables smashed over his head, it ceases to be entertaining, even when Mad Dog ups the ante by walloping him with a refrigerator.

The plot is of course almost non-existent, though it still manages to be muddled. Bad guys who wanted a valuable Buddhist amulet, which seems to be important but is quickly forgotten about, instead steal a worthless idol's head in a fit of pique, and if the villagers don't get it back in time for the holy festival, God won't end the drought by magic (the scriptwriters completely forget to inform us at the end whether this weird procedure, which seems embarrassingly primitive for the 21st century, actually worked). Therefore the country boy has to go to the big city and hit people. A lot. Unfortunately, to do this he needs to spend most of the movie in the company of the dreaded Comic Relief Character, whose wacky antics are uneasily juxtaposed with genuine violence and tragedy, such as an overlong car-chase involving far too many identical taxis, which mixes cartoon slapstick and zany face-pulling with several people getting burned to death.

"Shaolin Soccer" and "Kung Fu Hustle" do the improbable comedy action thing infinitely better. Here, the "comedy" just gets in the way of the increasingly brutal and increasingly monotonous serious fighting. And I have no idea what the sassy, tomboy-ish female lead is doing in the film at all. She gets a great deal of screen-time without ever contributing anything relevant to the plot other than having to be rescued a few times, and isn't even the love interest, since the hero, a novice monk about to take his vows, appears to be totally asexual. My guess is the first draft of the script included a bit of romance, then they found out that Tony Jaa's acting skills weren't up to anything as challenging as smiling, let alone kissing.

Highly recommended if you just want to watch an extremely fit young man who often takes his shirt off jumping about and hitting people hundreds of times in slow motion. Not so highly recommended if you're looking for a good story with memorable characters. And, apart from a downright surreal fight in a tree between numerous men covered in mud right at the beginning, the visuals aren't all that interesting either. Frankly, the whole thing seems less like a movie than Tony Jaa's show-reel, in which he demonstrates his skill at punching, kicking, jumping and scowling in the hope of landing parts in chop-socky films with much bigger budgets than this one.