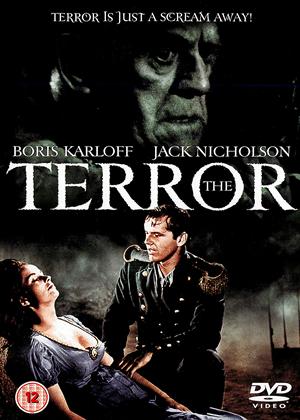 Synopsis:
The young Jack Nicholson stars in this classic horror movie in Napoleonic solider Lieutenant Andrew Duvaliar, who has been separated from his regiment on the north German coast. In this frantic search to regain his bearings and his regiment he encounters a mysterious woman named Helen (Sandra Knight) who transfixes him with her beauty and allure. But she may not be the helpful young woman she seems, as she tries to direct the hapless lieutenant to a certain death in the surf and quicksand traps of the beach. In his desperate search for a safe haven he stumbles across a foreboding looking castle.
he decides e has no option but to seek shelter there and is given a room for the night by the owner, an equally strange Baron Frederick Victor Von Leppe (Boris Karloff). But it would be wise to remember that whilst castle walls keep invaders out they are also ideal for hiding the sounds of gruesome activities within, their sinister secrets concealed from the world outside.
Actors:
Boris Karloff, Jack Nicholson, Sandra Knight, Dick Miller, Dorothy Neumann, Jonathan Haze
Directors:
Roger Corman, Francis Ford Coppola
Writers:
Leo Gordon, Jack Hill
Studio:
GMVS Entertainment
Genres:
Drama, Horror, Thrillers

Reviews (1) of The Terror

A very young Jack Nicholson, who had a small part in "The Raven", got to be the male lead, and a very confused Boris Karloff was persuaded to co-star in a production which, as an old-school actor who liked to learn his lines perfectly, he reportedly found genuinely distressing because the scriptwriters were making it up as they went along and he didn't know what his motivation was. And dear old Dick Miller, that irrepressible B-movie character actor who eventually gained minor immortality as the guy who unwisely sold guns to the Terminator (but couldn't provide a phased plasma rifle in the 40-watt range), is the sniveling lackey who sort of ties it all together. A few other people are involved, but their characters make even less sense.

Nicholson's weary soldier, whilst wandering around 19th. century Spain trying to find the Napoleonic War (which must make him the most hopelessly lost character in the history of cinema), blunders into a love-affair with a mysterious girl who looks just like the portrait of angst-ridden nobleman Karloff's long-dead wife, but she won't say who she is, and claims not to remember. This is a film in which every character is deliberately lying, can't remember who they are, or both, apart from the understandably bewildered hero, who knows nothing about anything and doesn't have much luck finding out. The scene near the end where Nicholson grabs Miller and threatens him with extreme violence if he doesn't explain the entire plot right now was shot after everything else. Roger Corman edited the footage he had into some semblance of a story, then told the scriptwriters to write Dick Miller an exposition speech somehow justifying all the foregoing incoherence.

This movie has to be seen to be believed! Corman may have been shamelessly cynical, but his small cast give it everything they've got, especially Karloff, who, despite his advanced age and poor health, is as willing to thrash about in freezing water as Bela Lugosi was in Ed Wood's "Bride Of The Monster". But it's so muddled that it looks as though somebody tried to film one of those long, creepy anxiety nightmares exactly as it happened, with a sort-of-rational explanation tacked on at the end. For connoisseurs of really, really odd movies only. Fun fact: this is the film-within-the-film playing at the drive-in cinema in Peter Bogdanovich's "Targets".