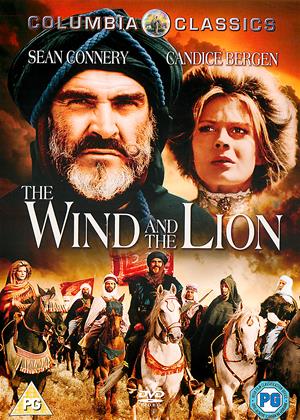 Rent other films like The Wind and the Lion

Reviews (2) of The Wind and the Lion

I seriously enjoyed this 1975 film - old-fashioned, maybe, but a good yarn of derring-do. They don;t make em like this any more and wouldn't - not with today's pc woke diverse casting box-ticking.

This is a movie where Sean Connery plays an Arab or Berber Sultan with a broad Scottish accent, remember - and these days the demand would be for someone non-white to play the role (hardly authentic though and no demand for colourblind casting for any ethnic roles ever, I notice...SUCH woke hypocrisy).

I have no idea if this is based on a true story or not. And really, I do not care. The British are there and Americans and French and Germans - and Moroccans. So it predates Casablanca then but is just as much a melting pot.

All that matters is that this is an action-packed story set in 1904 Morocco and thoroughly entertaining, with Connery acting the Berber Sultan in the manner of the Arab rulers in Lawrence of Arabia.

Of course, one has to remind oneself that the Barbary (Berber) pirates were the ones who raided the coast of Europe and especially England (Devon and Cornwall), Wales and Ireland stealing slaves - estimated at 1.25 million between the 14th and 18th centuries, right up to when Britain banned the slave trade in 1807. The BBC has yet to make a documentary about that - it does not fit the 'bad white European colonialist' agenda. But it is FACT. These Muslim Arab slave traders would raid villages on Sunday mornings when everyone was at church - they especially wanted the women and children, and all people stolen ended up in Arab slave markets, sold to hareems. Many people in Asia and the Middle East and North Africa have white European ancestry because of it (and soldiers). I would LOVE to see a movie made about that - but it won;t be in these woke and broke lie times.

4.5 stars. A good yarn. A Sunday afternoon film. Watch with Lawrence of Arabia.

Sadly, disappointing - The Wind and the Lion review by Dap

Although the film on the whole seemed a little dated, not surprising for the period in which it was made, there were some very well presented scenes. Unfortunately others were somewhat unbelievable.

Sean Connery was mis-cast as an Arab Sheikh I think, and was unable to totally suppress his Scottish accent.

Having watched a preview, I had expected better.