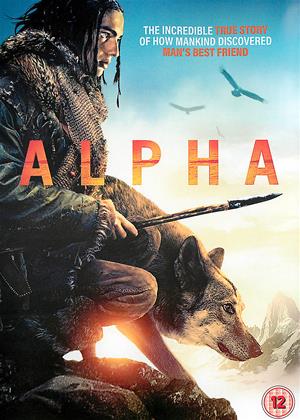 Funny without meaning to be - Alpha review by TE

Pretty dire 'rite of passage' tale where the story has no credibility as either fact or myth.

A film to watch with friends whilst stoned...lots of unintentional laughs!

I liked some parts of this film.

If you can get past the nonsense - such as Stone Age people wearing clothes that look fit for a catwalk, all fur parkas and even a skimpy swimming costume (what's he hiding his modesty from - a dog? lol); and their perfect teeth (not a one missing) and clear moisturised skin.

This is basically mostly an animation with CGI effects so all-consuming this is more CGI than live action.

An utterly unbelievable plot, to be honest - the cavemen seem to find perfectly round stones in abundance wherever they go, in a barren landscape.

There are better Stone Age films - even oldies like the Carry On film or The Land/People that Time Forgot. A short novel called THE GIFT OF STONES by Jim Crace is a great read too - way better than this.

No spoilers but the ending if so pc tick-boxy sentimental - even for Disney. And bizarrely, I note on the credits that dog playing ALPHA is called CHUCK - hardly a girl dog name. But maybe he's transgender eh?

A dreadful icky silly Morgan Freeman voiceover for the prologue and epilogue is, for me, unnecessary - and is packed with purple prose and clichés - all puppies and flowers and rainbows, the usual cod-religious cant about being friends and believing in yourself etc. Really vomit-inducing, as is the use of the pc word 'humankind' - fyi 'man' refers to people NOT just non-women! So MANKIND is fine.

Not much to write about unfortunately.

I was quite looking forward to seeing it having missed at the cinema but now I can see why it wasnt shown for very long.

First we found it was subtitled and then a very very very predictable story line.

The wolf was good though.

Thats about it really.

Good ideas dub down. lacks Sophistication and ambition. as usual another film which insults the intelligence of the viewer.

Not quite bad enough to be funny - Alpha review by AR

Well, the title says it all. Essentially a very thin story, no more than adequately acted, with less than state-of-the-art computerised action. A feature, though, was the (presumably made up) Palaeolithic language rendered intelligible with sub-titles. But since no-one nowadays speaks Palaeolithic, whom does it serve?

It’s 20,000 years ago. Our hero is tossed off a cliff by a bison onto an unreachable ledge and is left to perish in the wilderness. Avoid the tell-all trailer. Avoid spoiler reviews. You don’t need to know any more to get the most out of it as one amazing scene follows another. It’s both a thing of beauty and an exciting thriller. A film to wallow in.

Alpha (aka The Solutrean) review by Mark McPherson - Cinema Paradiso

Alpha is a prehistoric adventure picture that takes place 20,000 years ago in Europe, featuring how a hunter-gatherer tribe functioned. They’re speaking an ancient language that I wondered if there were subtitles I forgot to turn on with the DVD. As the film went on, however, I didn’t bother seeking them out, considering a wealth of adventure films can pretty much fill in the blanks of what is being spoken. Seeing as this is mostly a standard survival picture, it could very well be dialogue free if only to appreciate the visual splendor a little more.

Among the tribe of warriors is the young Keda, seeking to prove his worth to his clan. They hunt wild bison and rely on sharp weapons to attack and frighten them, claiming meet for their people. He’s still very much rough around the edges, in need of more training to survive the harsh wilderness. And he’s going to have to learn fast as the creatures of the land can attack and kill them at anytime. But then the worst fate befalls him as a bison sends him tumbling off a cliff. The tribe believes he is dead and performs a funeral.

Of course, he’s not dead yet and must find his way back to the tribe on his own; the ultimate test of proving his worth as a warrior. Along the way, he’ll encounter an unlikely ally in the form of a wolf; Czechoslovakian Wolfdog to be precise. They’re initially enemies but as the harsh environment of dangerous wildlife and brutal winters threaten them both, they soon learn to work together on their quest for food and survival.

And there’s little more to the story than that. Director Albert Hughes thankfully keeps most of the melodrama of the tribe to a minimum so we can better appreciate the silence sensation of a world thousands of years ago. There are a few action scenes of computer generated bison that stampede, presented with some obvious research put into the look and behavior, but still coming with a certain artificiality seen in previous prehistoric adventures such as 10,000 B.C. There isn’t much to the characters either that would warrant much dramatic intrigue. Keda’s motives are basic and his desires of the era, not much different than the drive of his mentor Ked to lead his tribe to carry on another winter. They hunt, kill, eat, and bury their dead with tearful grief amid stacking of stones.

But even at a fairly brisk 90 minutes, it still feels like a bit of a slog for the familiar. Of course, I’ve got to mention that great acting of the Czechoslovakian Wolfdog whose name is Chuck. He’s called upon for some extraordinary scenes that work rather well. The highlight is easily a scene where Keda is trapped beneath the ice and the Wolfdog struggles above the surface to find a means of rescue. It’s staged beautifully with some unforgettable shots.

That being said, Alpha’s presence is mostly forgettable. It falls in line with a lot of other period adventure pictures that, while well built for the amount of research that went into them, lacks a certain notability. At least with 10,000 B.C. it was memorable more for being a laughable blockbuster with ridiculous scenes. Alpha will be best noted for some stellar dog acting amid a mostly subtle survival picture that falls into the familiar motions. But, hey, if all you’re seeking out is a good movie with the dog as the hero that isn’t just more of the same kid-friendly affair, it’s slim picking when hunting for such a film. Take the meager meat of this picture for all its worth.