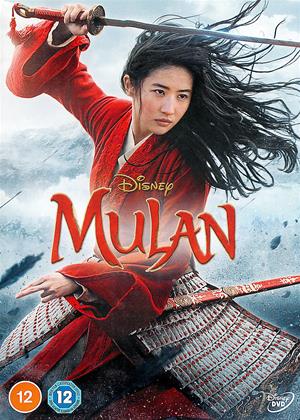 This is a family film complete with mawkish sentimentality, slapstick and bloodless battle scenes, so don’t expect a Kurasawa-type adult epic. Everything in it, from interiors to skin tones has had the life airbrushed out of it to look like a child’s picture book. The theme of female empowerment is lathered on but seems somewhat at odds with the Chinese government-friendly message of bringing honour to the family.

With bland dialogue and disappointing action scenes, it nevertheless remains surprisingly watchable. Reasons for staying awake include the lovingly photographed Chinese landscape, supporting characters played by action stalwarts such as Donnie Yen and Jet Li and, above all, the gobsmacking incongruity of the whole project. There’s even a warbling pop song over the end credits to send you away bemused.

We were really looking forward to watching this as we had enjoyed the Disney animation years ago. However, this version has no narrative, is overrun with special effects that don't add anything to the story and is just a complete muddle.

We would recommend watching the original Disney animation which is funny, has a proper narrative and is a really enjoyable family film.

The original was hilarious, this version doesn´t get anywhere near a movie worth your time.

The story has been stripped of everything which made the cartoon great and is overly relying on special effects.

We did not finish it, switched it off after 30 mins and returned it. Watched the cartoon instead (for the nth time) and loved it as much as we did the first time!

Disney has lost its way

An entertaining if straight forward family fantasy action adventure. A more or less remake of Disney's own 1998 animated version of the story but without the songs (although they are referenced in the soundtrack). Set in 4th century China this tells the story of a young woman who steals her father's sword and answers a call to arms against an evil enemy but has to masquerade as a man. Full of brilliantly coloured set piece battles and fights this is good solid fun with everything well managed and staged for family viewing, so despite the swordplay this is a bloodless story and manages to avoid any complicated issues around a young woman in the company of a lot of men who don't realise her gender. The most interesting aspect of the narrative is the parallels between Mulan (Liu Yifel) and a witch helping the bad guys (Gong Li) and their struggles with finding a place in a masculine world. In any event this is well worth a watch with all the family.

Not as good as the original - Mulan review by PL

Disappointing, the adaptation didn't live up to the original. Missed the original songs, and dragon side kick!

The Disney live-action retreads are in a tricky spot when tapping their classic animated films for more movies with notoriety. They mostly gain a ton of ire for either merely duplicating elements of the original film or not including elements of the original film. The studio simply can’t win with the scrutinizing Disney adults. But if they must continue making these movies for money (which they still make quite the cash-cow), I at least appreciate that something like Mulan can venture outside the typical comfort zone of its source material.

The initial premise is similar to that of the original animated movie, sans that sassy comedy and musical numbers. Mulan (Yifei Liu) resides in a Chinese village where war is on the horizon and her father is drafted but is quite ill. Taking this as a moment to prove herself, Mulan disguises herself as a man and enlists as a male member of her household for military training and preparing for battle. She tries to conceal her identity from the strict Commander Tung (Donnie Yen) but doing so will be quite difficult. She’ll also have to contend with the sinister forces of the merciless warrior Böri Khan (Jason Scott Lee) and the dark magic of Xian Lang (Gong Li).

Mulan marks one of the more serious attempts by Disney to amplify a different tone from the familiar animated classics. Personally, I’m all for this approach. Instead of just performing new renditions of the iconic songs that will be held up to very high scrutiny, do away with it and just try to stage a compelling wire-work action picture. And for the most part, that’s what Mulan attempts. Some of it works but there’s a whole lot of extra stuff that doesn’t quite hit the mark.

Aiming less for comedy, the dragon of Mushu who was voiced by Eddie Murphy is not present in this picture. For many, this seemed to signal that Disney was trying to veer away from the fantastical and craft a more believable period war epic of Chinese culture. Those who made such a theory were dismayed to learn of Xian Lang transforming into a phoenix and Mulan possessing magical powers. This not only robs the film of being set further in reality but also makes Mulan’s underdog nature less inspiring when her apparent powers were always there, even if the film tries to stress the point about not being afraid to be who you are.

Thematically, Mulan is quite a troubling film to this degree and I don’t want to discount those issues. There’s a conflict in such a presentation that doesn’t feel as fully explored or elaborated on to make the moral lesson punch harder. What does work about the film is the action, which is most likely going to be the heaviest selling point. It’s not the finest of sword-fighting and archery but it is competently staged and even takes exaggerated risks here and there. Mulan’s climactic fight with Khan, in particular, is a scene that will either be the most absurdly entertaining moment or the final nail in the film’s coffin for some.

This Mulan is merely a mixed bag of solid sequences caked on to disguise a thematically adrift picture. It gets the job done of crafting some fine action and compelling character drama more so than previous live-action Disney retreads. But in terms of straying away from making baffling choices that will send Disney fans going to Defcon-5 in their fandom comparisons, these films have a ways to go if they ever want to be more than a predictable template.