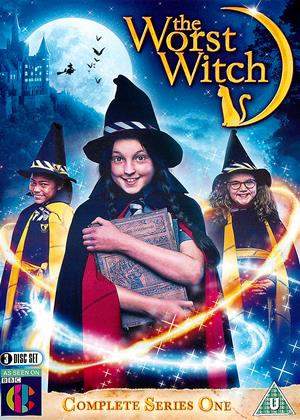 Reviews of The Worst Witch: Series 1

The Worst Witch is a fun, modern show about young witches, their magic, and the silliness about how every word up to here sounds. With that being out of the way, let’s address some possible issues in regards to this series’ originality: first off, this show is based on an older show that was inspired from a film that was, in turn, inspired from a novel written way back in 1974. As you can see, it has nothing to do with Harry Potter except maybe the similarities that humans can come up with whilst building a fantasy world of wizards, fantasy, and the like. Now, for a moment, let’s throw the cynicism away and try approach The Worst Witch as objectively as possible and as honestly as needed.

The series’ main focus is on Mildred (Bella Ramsey), a teenage witch whose inclination for trouble and unintentional mishaps are met with an equal measure of misdeeds from her peers too. So, one could say the whole group of young witches is perfectly teamed, as each of these characters has its unique abilities that translate well to the small screen, albeit not without its flaws. These so-called ‘flaws’ can be traced back to the show’s lack of budget, as well as the over-reliance on continuous gags and cheap tricks (no pun intended) to elicit laughter whilst a serious issue is taking place. But, since this show is mostly aimed at kids, its target demographic won’t even notice these flaws and perhaps this is for the better of everyone involved in the project.

Additionally, the young actors are very talented, especially the one who plays the main character – witch Mildred (Bella Ramsey). In regards to the show’s storyline and plot, one cannot assert anything ground-breaking or convention-defying, but for a show about teenage witches – The Worst Witch is known to over-deliver. Plus, there is an excellent chemistry between the cast members which adds much to the overall experience as well. The narrative is, for a lack of a better word, cute, and the dialogue is adapted very well considering this is a children’s show. To sum up this aspect of the show, The Worst Witch mixes humour, sweetness, and quirkiness all at once, and manages to do it in a non-intruding way that would make any family’s Sunday night that more enjoyable to say the least.

Overall, whilst having some similarities with J.K. Rowling’s evergreen tale of her titular character Harry Potter, The Worst Witch stands perfectly on its own feet and provides decent enjoyment for years five to ninety-five. If you’re a lover of fantasy settings and charming young witches, then this series is everything you’ve looked for in a show, and more. You kids will like it too (as if that wasn’t emphasized enough).