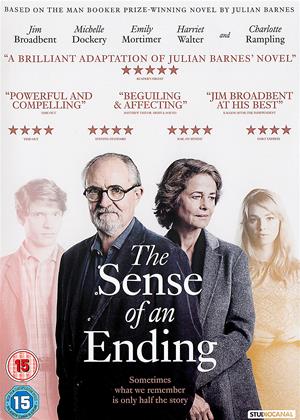 Rent other films like The Sense of an Ending

Reviews (13) of The Sense of an Ending

Those who did not live through the 1950s, 60s and 70s are likely to appreciate this fine film less than an older audience. You need to have known what it was like not to have easy and instant communication, not to have the acceptance of sexual freedom, not to have equality, not to have even the language in which to discuss how you felt and thought, let alone the societal permission to do so. You need to have carried the weight of expectations of behaviour and relationships that are unthinkable by today's young, and you need to have had your heart broken, to have lost touch, to have lived a life and then, in your later years, to have tried to work out what it was really all about. Somebody younger, who is interested and aware, could and should enjoy the film, not least for the delicacy with which the story is expressed. Older viewers will not need to have it explained.

Loved it - The Sense of an Ending review by JW

great character development over a life time. being middle aged my self and having spent some time contemplating the past found this film delightful, entertaining and helpful all at the same time. Very well put together by great film makers.

One of the most genuine and plausible stories of individuals battling to reach out and connect with their fellow beings, while ensnared in a mass of emotional tentacles of restrictive values from 50 years back. We see some of the characters struggle successfully to go beyond these constraints, while others wither or even die.

Unusual, but thoughtful, good and magnificently acted by Jim Broadbent. - The Sense of an Ending review by PA

Not everybody's cup of tea: a bit short of sexiness and excitement. But really a very good film, getting across the author's subtle ideas about endings, and telling a convincing human story. Better than 49 films out of 50. Amply worth seeing for JB's performance.

Boring - The Sense of an Ending review by MH

If you are a Jim Broadbent fan then you will no doubt enjoy this, as there is a lot of Jim being . . . well, Jim Broadbent. Seen one of his films, you've seen them all. I find his customary film persona intensely irritating, and spend most of the time wanting to slap him. So self-absorbed, so unable to relate to other people and their needs, so generally clueless. I chose to try to overcome this because of the several other good actors billed, and on the recommendation of a newspaper critic whose opinion I usually find useful.

The story is muddled and told in a series of flashbacks to his student days, many of them (the flashbacks) repeated 2, 3 or even 4 times, and a couple of them confusingly shown with Broadbent as his present day character inserted into the earlier scene. There is the occasional clue as to things that are happening which are never elaborated on, requiring some intelligent guess-work on the part of the viewer (perhaps I'm not intelligent enough - there is also a suicide, the reason for which I couldn't work out).

The main female character in youth is enigmatic to the point of being boring, and Charlotte Rampling, who has made a career out of being inscrutable without actually acting, does her usual thing.

Michelle Dockery sports a huge and completely unnatural-looking pregnancy bump, while her character adds nothing to the story.

I saw it in a cinema and the man next to me got up and left about halfway through, swiftly followed by a couple in the back row. I should have followed their example - 2 hours of my life wasted.

Cinema Paradiso has a huge catalogue of really good films - I advise you to choose another.

I found this film to be JUST AWFUL - though I would criticise the acting, esp the great Jim Broadbent.

The problem is the source material. It is from a Julian Barnes novel and he must be the smuggest smuggy writer of smug upper-middle class smug whinge-athons EVER. SO self-obsessed and lacking self-awareness; so lacking social awareness - as if everyone lives in £3 million houses and has university friends who live in mansions with wisteria round the door.

Despite the tragedies portrayed - no doubt a typical writerly attempt to press those empathy emotion buttons - I found I simply did not care about ANY of these characters or their relationships.

You'll learn more about life from watching Paddington, frankly - and see a more realistic London portrayed too, complete with bear!

Saw it at home, never came to a local cinema! - The Sense of an Ending review by PP

This film was listed locally, but never arrived! Now I've seen it, I'm not altogether surprised. It's very slow, and dull in parts. Beautiful to look at but I wouldn't recommend it.

Loved it! - The Sense of an Ending review by JH

I don't want sex and excitement, and this film is right up my street! OK--a bit slow maybe, but interesting and thought-provoking story line and good acting.

Boy, does this love itself, or what? - The Sense of an Ending review by TR

Self-obsessed, upper-middle-class twits yakking on about themselves, perfect maybe for post-Brexit Britain, but of zero interest as entertainment.

Seems hard now to remember the echoes of "Victorian morality" of that time. - The Sense of an Ending review by MT

Had high hopes of this film and the acting was excellent. Sensitively portrayed on the whole. I found the time switching a bit irritating though.

Interesting, but a little drawn out. As a viewer who reviewed on a film website, I am left slightly confused at the end.

Jim Broadbent, Harriet Walter and Charlotte Rampling are excellent, as usual. The young lads are more convincing than young Veronica, there is no way that the young pouty actress who plays her young could turn out as distinguished as Charlotte Rampling!