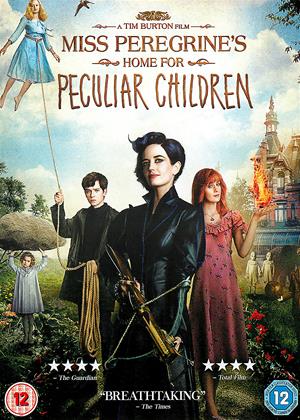 Rent other films like Miss Peregrine's Home for Peculiar Children

Not sure if would say is all kids film? Maybe 10/12 onwards to be fair. Is bit too seriously weird in places....Tim Burton.....some of it would freak small ones.

Typical things out of Nightmare Before Xmas etc.

Is well acted and well made, and something a bit quirky, so stands out from a lot of the detritus inflicted on the screen over last few years.

OK so this is so-so is all ways - so-so script, so-so story, the usual so-so CGI effects etc. It has a stellar cast including Judy Dench (who no doubt is still hugging the large cheque). But all in all it left me a little bit cold.

But it's not that bad. A well-worm time-travel plot. A build-up to an improbably finale. A love interest.

A Brit comedian dons a good US accent to play the kid's father and the lead actor Asa Butterfield is well cast. Terence Stamp seems a bit miscast for some reason though... Not sure why.

I tire of fantasy and sci-fi - the way anyone can solve a problem by waving a wand or using magic powers is tiresome indeed and all a bit of a cop-out.

But watchable so 3 stars.

One of the worst Burton Films of his Career! - Miss Peregrine's Home for Peculiar Children review by CS

I wasn't quite sure what to expect from this film, but I have to say that in the end it was nothing but one big disappointment and quite boring and a chore to watch too! There is little originality here, most of the themes, effects, creatures and ideas have been pilfered from past classics, with themes reminiscent of Jason and the Argonauts, Harry Potter, X Men and even Pink Floyd's 'The Wall"! There's nothing very peculiar about the children, if you're familiar with the classics, you'll recognise where most of these ideas come from. Given all the big names in the cast, there is little room for any form of character development and the performances from the big names are limp at best, but this is mainly because they are pushed to the background in favour of the children characters instead, so really the big name actors are merely support for the younger actors in this film! This feels as though it is trying to be an American version of classic European Gothic Fairy Stories such as Pan's Labyrinth, Hell Boy and Harry Potter, with a very American spin, but set in Wales, not that you'd know it or recognise any of the scenery, except for Blackpool tower, set in a place which looks nothing like Blackpool itself! I actually had to watch this in two parts as I found it so boring, so all in not a very well made or imaginative film at all in my opinion!

Dreadful film. Daughter had read the book (which she enjoyed and will read again), but thought the film was poor and will not be watching ever again. Enough said from someone who liked the book.

This surpassed any expectations which I, and my family had. Funny, poignant and visually sumptuous this is escapist entertainment, but with an edge. Without delving into any psychological or socio-political reading of the film, it is well-worth watching, not least of which for the stellar cast, the art direction, the set and costume design and, of course, the crisp direction of the story. It looks appealing in the dark aesthetic Burton has established as his own particular USP. With elements of romance and suspense, this adventure is a cinematic journey I can wholly recommend. With Eva Green, Judi Dench and Samuel L.Jackson on screen, this film has its magic in spades.

Another Tim Burton incomprehensible story with so many plot holes as to make it unenjoyable.

Anything involving time travel raises more questions than it should (vide Star Trek in all its guises!) and this one is no different, but the storyline is 'plausible' and, at times, confusing but the whole film is enjoyable to watch.

I'm surprised that, given the US-centric storyline at the start, that Wales was the 'chosen' venue for the storyline and that it wasn't labelled as "Wales near England"!

A peculiar film indeed: Miss Peregrine's Home for Peculiar Children by director Tim Burton is all you’ve come to expect by director Tim Burton in the last decade or so. It follows a tim-burton-esque formula that includes bizarre creatures, over-blown mysteries and Eva Green stepping in for the (for some reason) absent Helena Bonham Carter. Still, the film is fun as heck and I’m glad I watched it nevertheless.

During the years, Tim Burton’s talent to tell a story slowly changed (or morphed) into that which puts esthetics in the first place. Why is this so is left open for speculation, but one thing is clear: Burton abandoned classical storytelling in favor of something new, i.e. telling a story trough external factors such as a dim color palette, eccentric apparitions and a same acting cast spanned across several decades.

From here onward it’s clear: either we don’t understand Burton’s genius, or the former Disney animator is slowly losing his touch. I tend to believe it is the former, rather than the latter.

Miss Peregrine's Home for Peculiar Children ‘borrows’ heavily from other works, such as Frankenweenie and Edward Scissorhands, while some would argue that here Tim Burton is choosing to quote himself by introducing similar elements to the present storyline. Whichever is true, one is certain: Asa Butterfield is a rising star and kudos for his convincing acting.

The story is as follows: after Jake (played by Asa) founds out from his grandfather’s stories something peculiar about a certain orphanage in Wales, he embarks on a quest to find out what’s going on. He then meets Miss Peregrine who in turn explains some peculiar understandings of Jake himself: namely, he’s a certain kind who holds powers granting him the ability to manipulate time. From there onward, Jake battles the Barron (played by Samuel L. Jackson), who in turn wants to become immortal no matter the cost.

Miss Peregrine's Home for Peculiar Children is an altogether fun experience, provided you leave your antagonism toward Tim Burton outside the theater. It’s also full with fantastical creatures which employ stylized gothic outsides that, and I must admit, are creative and original enough to differ from previous Burton features of similar theme and tone.

Of course, nothing would have ended up so magical without the creative mind of writer Ransom Rigg, his vision about the so-called antagonists hollowgasts, what they eat and how they behave. This could’ve been visually explored further, but it’s good enough as it is.

All taken in consideration, Miss Peregrine's Home for Peculiar Children works on both levels - as a movie for adults to find some entertainment and younger folk to enjoy. Yes, it contains all tropes Tim Burton uses and abuses throughout the years, but given recent Hollywood – do you find yourself as having a choice?