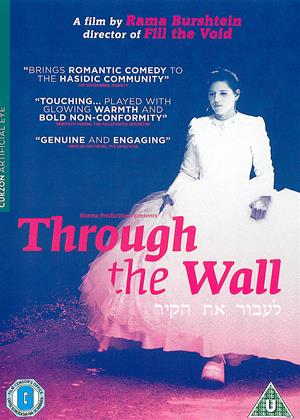 Synopsis:
Michal (Noa Kooler) is due to be married. The hall is booked, the wedding dress has been chosen, but there is one small problem - at the last minute her groom has had a change of heart. Unwilling to return to a life of dating, Michal refuses to cancel the wedding plans. Believing that it is a small task for God to find her a new husband, she embarks on a frequently hilarious matchmaking journey to find the right man.
Actors:
Dafi Alferon, Noa Kooler, Oded Leopold, Ronny Merhavi, Udi Persi, Jonathan Rozen, Irit Sheleg, Amos Tamam, Oz Zehavi
Directors:
Rama Burshtein
Producers:
Assaf Amir
Writers:
Rama Burshtein
Aka:
The Wedding Plan / Laavor et hakir
Studio:
Curzon / Artificial Eye
Genres:
Comedy, Romance
Countries:
Israel

Reviews (1) of Through the Wall

Great movie! - Through the Wall review by SB

Another great movie by Rama Burshtein (Fill the Void). Really loved it. Michal's story is moving, genuine and filled with hope. Would really recommend it.

Through the Wall is an introspective, interesting, and an epistemologically sound film that requires some leap of faith (mainly Orthodox Judaism) in order to follow along with its premise. Which is the following: Michal (played by the amazing Noa Koler) is a 32-year old Jewish woman who’s got no luck when it comes to relationships and marriage. And so, she embarks on a quest to find a suitor before time runs out. In this regard, Through the Wall is unlike anything you’ve ever seen, mostly because it’s different in aspects to the underlying cultural and traditional Jewish values. Does this also mean Through the Wall is a good film? Well…

No because Through the Wall could’ve been much, much better if the farcical elements were strung along the comedy parts, and the seriousness of the film layered upon the underlying philosophical principles (of arranged marriages and the power of choosing). Instead, director Rama Burshtein’s (herself being an Orthodox Jew as well) film throws all of these subjects into a blender, turns up to maximum, and expects kosher when all is said and done. Unfortunately, it doesn’t work that way, and this is why Through the Wall suffers greatly (both in plot and character development as well).

Additionally, the screenplay makes some very sharp turns that detract (both literally and figuratively) from the true nature of, say, how a real person would act given the same circumstances. This is not to say that we should expect Through the Wall’s script to draw on top of the lines of how real life goes, but rather to present their respective characters with plausible solutions to conflict (both external and internal), so as to mitigate the myriad of choices a narrative can wander of (as it does sometimes).

Now, the good. Through the Wall is funny, I’ll grant it that, but not in a laugh-your-arse-out way; it’s funny in a way that’s both relatable and surprising which, despite the unconventional script, Noa Kooler manages to pull off a rather satisfying portrayal of a woman trapped in a religious system from which there is no easy way out. Some of the suitors are also playing along those lines, such as the engineer, or the pop star, or even the one… well, let’s not spoil anything, shall we?

All things considered, Through the Wall by director/writer Rama Burshtein is a veering look into the self-fulfilling prophecies of the more religious Jewish communities, which can be also read as a critique to some of the practices that still exist to this very day. Other than that, the rest of the film is filled with questionable scenes that work better in a real rom com – as opposed to the semi-philosophical feature that is Through the Wall. Watch at your own discretion.