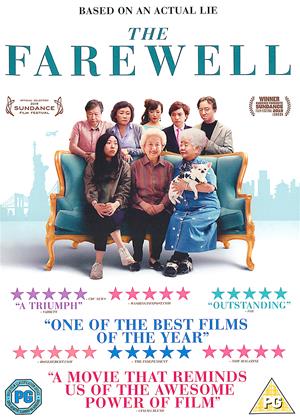 Synopsis:
In this funny, uplifting tale based on an actual lie. Chinese-born, U.S.-raised Billi (Awkwafina) reluctantly returns to Changchun to find that, although the whole family knows their beloved matriarch, Nai-Nai. has been given mere weeks to live, everyone has decided not to tell Nai Nai herself. To assure her happiness, they gather under the joyful guise of an expedited wedding, uniting family members scattered among new homes abroad.
As Billi navigates a minefield of family expectations and proprieties, she finds there's a lot to celebrate: a chance to rediscover the country she left as a child, her grandmother's wondrous spirit, and the ties that keep on binding even when so much goes unspoken. With 'The Farewell', writer/director Lulu Wang has created a heartfelt celebration of both the way we perform family and the way we live it, masterfully interweaving a gently humorous depiction of the good lie in action with a richly moving story of how family can unite and strengthen us. often in spite of ourselves.
Actors:
Shuzhen Zhao, Awkwafina, X Mayo, Hong Lu, Hong Lin, Tzi Ma, Diana Lin, Yang Xuejian, Becca Khalil, Yongbo Jiang, Han Chen, Aoi Mizuhara, Xiang Li, Hongli Liu, Shimin Zhang, Jing Zhang, Jinhang Liu, Xi Lin, Shi Lichen, Lin Wang
Directors:
Lulu Wang
Producers:
Anita Gou, Daniele Tate Melia, Andrew Miano, Peter Saraf, Marc Turtletaub, Lulu Wang, Chris Weitz, Jane Zheng
Writers:
Lulu Wang
Others:
Daniele Melia
Studio:
Entertainment In Video
Genres:
Children & Family, Comedy, Drama

Reviews (8) of The Farewell

Some good moments - The Farewell review by DT

Gently amusing, fairly predictable, not as tear-jerking as it intended to be. The characters held our interest, particularly the 'dying' traditional grandmother and the Americanised granddaughter, but also the uncle. A bit slapsticky at times. Enjoyable but not memorable.

Oh for standardised subtitles - The Farewell review by JS

We had really looked forward to this much hyped film.

An interesting story juxtaposed with the dichotomy of West meets East.

But, and there is always a but, and iñ this case a huge BUT how can one follow a foreign film if the subtitles are unreadable.

Was the bride pregnant? Couldn't tell because the white subtitles were masked by revolving white plates. Many other examples while the subtitles for the hard of hearing were exemplary. Big and bold!

Perhaps your in-house critic understood Chinese or watched in a cinema but, why oh why, isn't there an international standard on subtitles?

They need to be in a bold font, of a certain size and preferably white on a black background.

So dull I fell asleep - The Farewell review by JL

'In this funny, uplifting tale...' that has to be the most misleading start to a synopsis ever! I must admit that I gave up once we reached the wedding (about halfway through?) but there was nothing remotely amusing up until then and I found it thoroughly dull. The acting and sets were fine but I'd count it as an hour of my life wasted.

Surprisingly good - The Farewell review by BE

The first film set in China that I have ever really enjoyed and have been able to relate to. Beautifully crafted and fine acting. That having been said, I must concur with JS’ review - it’s ludicrous trying to read small white subtitles on a light background, thus missing a lot of the dialogue. I was also somewhat irritated in earlier scenes when the ‘dying’ grandmother was seen coughing and spluttering willy nilly whilst in close proximity to other people (without coughing into a tissue, her elbow or putting her hand over her mouth). We are now only too fully aware that this spreads disease at a rate of knots!

Those subtitles - The Farewell review by GJ

Missed crucial parts of the movie because some genius decided to use white standard lettering ( not bold ) for subtitles . There is one important scene in the movie where the titles were lost within a white table cloth and white plates .

i think white lettering above a black background - though jarring - would have helped or as the film was shown in letterbox format then better to stick subtitlre below the film.

A light comedy that has wit and a certain charm and yet it's all a touch dull. There's a clash of cultures theme going on in the background here with a story, supposedly based on a real one, that didn't work for me although the film explains it's a cultural norm, something I found hard to believe. Anyway it's about a young Chinese born girl, Billi (Awkwafina) who has been raised and lives in New York. She regularly contacts her beloved grandmother, Nai Nai (Shuzhen Zhao), who lives in China by phone and is distraught when she discovers Nai Nai has less than a few months to live due to cancer. The surprise is that the family have decided to hide this from Nai Nai and they've bought forward a family wedding in China as a ruse to get together with her. Having an American way of thinking Billi thinks this is wrong but goes along with it and at the family gathering the issues between the various factions in the family come to the fore. This is a pleasant enough family comedy drama but it just didn't liven up enough for me despite an especially good performance from Awkwafina.

Charming - The Farewell review by RC

The centre of the story is the relationship between Nai Nai and Billi, which provides us with a way in to come to understand, as Billi does, some of the cultural differences between the individualistic american way and the Chinese social family. From being initially appalled at the lie that is being collectively perpetrated, Billi comes to accept and even embrace it.

The key scene is where she is with her father and uncle at their hotel in Changchun just before the wedding and they explain the difference between living in America and in China is that in America people believe their life belong to themselves, whereas in China people's lives are part of a whole, of a family, of society, and therefore it is the family's duty to carry the emotional burden of the cancer knowledge FOR Nai Nai.

The whole film is an illustration of this point, and it works really well. A simple story told with subtlety and richness to make a charming film.

The Matriarch - The Farewell review by AA

Interesting film about the final days of the family matriarch who is terminally ill and how the family try to manipulate things to keep he happy in what they believe are her final days.  Add to the mix an organised wedding, the arrival of a son and wife who emigrated to the United States and their daughter who believes she should be told how ill she is and the ensuing machinations keep the film moving along.  I enjoyed it as it reminded of the time I spent living and working in Singapore.

Throughout The Farewell, there’s a somberness not for the desire of a needle to drop but that the needle will never drop. There’s an uncomfortable and heartbreaking level of repression present within the film that shreds the soul when realizing that nothing all that truthful can come out from a family and culture that would rather main dignified than emotional. It’s too hard to bear and even those seasoned enough in shirking their true feelings are still chipped and unsure about how viable these choices are.

Nai Nai (Zhao Shuzhen), a grandmother in China, is dying of lung cancer but nobody will tell her the truth. Her more able-bodied sister receives the news from the doctor and lies to Nai Nai that her CT scan only revealed “benign shadows.” The rest of the family learns the truth and figure they only have one last chance to be with Nai Nai. Under the allusion of a staged wedding, the family spread across America and Japan venture home to spend some time with Nai Nai in a bittersweet reunion. The last to learn of this is the struggling Billi (Awkwafina), hard for cash and her career going nowhere. When learning this news, she knows she has to go, even though her emotionless parents are reluctant with how easily Awkwafina gets emotional over someone she has grown so attached to.

The whole family assembles and grandma is ecstatic to have them all come together. On this seemingly joyous occasion, nobody will tell Nai Nai the bad news and indulge her smiles and banter. Billi can’t stand this charade but decides to keep it up because everyone agrees that it’s best Nai Nai keep cheerful to the very end and not wallow in her mortality. They all put on a cheerful face and the long visit is one of joy laced with the bitter realization of the truth.

Throughout the film is an admittance of a cultural aspect that goes unchallenged. Billi is told by her mother that “Chinese people have a saying; when you get cancer, you die.” It’s a somewhat silly line but also carries an uncomfortable truth of knowing that death is coming and that it is not fought with admittance but repression. It’s damaging but this is perhaps how we view all mortality including our own. We don’t think about it until the very end and distract ourselves with other thoughts and sometimes lies. Because when we break and think about it, the joy evaporates and fear sets in for the hereafter.

We see a few members of the family crumble, especially at the wedding. None will reveal the truth but most will turn into a sobbing mess when addressing Nai Nai. They can’t help it; they can’t hold it back. In China, based on the conversations of the family, crying is not a dignified trait and families will sometimes hire professional criers for funerals to do all the emoting for them.

There’s a somber warmth to The Farewell that made the film quickly work its way into my heart, only to shred it by the final act. The most heartbreaking moment of the picture is not the death of Nai Nai, which never comes. It’s a relatable scene where the family says their quiet and somewhat passive goodbyes to Nai Nai as they pile into the car to head to the airport. Nai Nai bids farewell with her cough and the family is silent for the car ride back, all the sadness behind their eyes.

The Farewell is easily one of the best films of 2019 for its deeply moving human nature and a genuine appeal to our repression of emotion and fear of mortality.