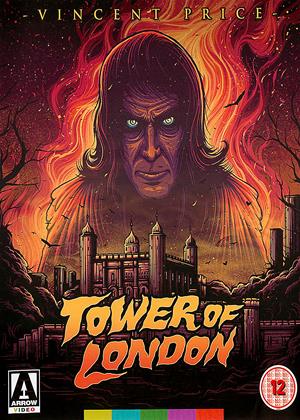 Synopsis:
Having made their mark on American horror cinema with three colourful adaptations of Edgar Allan Poe - 'The Fall of the House of Usher', 'Pit and the Pendulum' and 'Tales of Terror' - Vincent Price and director Roger Corman enjoyed a brief hiatus from the macabre author with 'Tower of London'. Shot in black and white, the film was loosely based on the Universal horror picture of the same name as well as two Shakespeare plays: a dash of 'Macbeth' and a dollop of 'Richard III'. Price plays Richard of Gloucester, brother to a dying king and eager to take his place on the throne. When he is overlooked in favour of their sibling, the Duke of Clarence, things take a murderous turn.
Richard goes on a murderous rage, only for the ghosts of those he has slain to return from the grave and haunt him... Less well-known than the Poe movies, 'Tower of London' is no slouch. Price relishes the opportunity to flex his Shakespearean muscles, just as he would eleven years later with Theatre of Blood, and Corman works wonders, as usual, with his low budget. If you've ever wondered what a drive-in Shakespeare film would look like, you're in the right place!
Actors:
Vincent Price, Michael Pate, Joan Freeman, Robert Brown, Bruce Gordon, Joan Camden, Richard Hale, Sandra Knight, Charles Macaulay, Justice Watson, Sarah Selby, Donald Losby, Sara Taft, Eugene Mazzola, Morris Ankrum, Gene Roth, Jack Tornek
Directors:
Roger Corman
Producers:
Gene Corman
Narrated By:
Paul Frees
Writers:
Leo Gordon, F. Amos Powell, Robert E. Kent
Studio:
Arrow Films
Genres:
Classics, Horror, Thrillers

Reviews (1) of Tower of London

It's hard to believe that Roger Corman thought he would be the ideal director to take on Shakespeare, but the evidence is right here! Guess what - Corman was wrong. This bizarre mash-up of "Richard III" and "Macbeth", not to mention a weird attempt to tie it in with his ongoing Poe series, is a half-hearted floundering mess.

The usually reliable Vincent Price is absolutely dreadful as Richard III. He's occasionally quite good, but mostly he's strangely muted and awkward, as if he's taking it far too seriously because it's Shakespeare. Which of course it isn't, though I think there are little bits of actual Shakespeare dropped in here and there, meaning that the dialogue randomly lurches in and out of Elizabethan English. But mainly it's the work of some hack who should have stuck to second-rate horror movies. Vincent's much, much better when he quotes genuine Shakespeare in "Theatre of Blood" (including a scene from "Richard III"), undoubtedly because it's a black comedy so he allows himself to go gloriously over the top. Here, he pulls peculiar faces, does a silly walk, and somehow manages to play a raving mad deformed medieval serial killing monarch without being interesting. And that wig doesn't help. Or that hat. Above all, nobody who wants to be taken seriously should do a silly walk while wearing tights, especially if they're male.

Everything about the production is a bit off. The star is lousy, and nobody else is the least bit memorable. The inevitable romantic subplot has nothing to do with anything. Sometimes it seems to be trying in a desultory way to be a horror film, presumably so that those scenes could be included in the trailer and people would get the idea the whole movie was like that, when mainly it's just Vincent Price going a bit mental. Even his insanity is oddly botched; the ghosts that torment him are mostly portrayed as if they're hallucinations created by his guilty conscience, yet they correctly predict the future and sometimes try to kill him with poltergeist phenomena, so they must be real after all. The horror elements are tame and limited to a few scenes, as is anything you could honestly call action. Inevitably, a movie called "Tower of London" has to show us that building at regular intervals, and every time it does, Monty Python fans will be unable to prevent themselves from muttering "it's only a model". Worst of all, what ought to be an extremely colorful film is shot in black and white, as if Roger Corman knew it was a dud and couldn't be bothered wasting any more money on it than he had to.

You'll probably enjoy the 1939 movie of the same name a lot more than this sort-of remake. A not-yet-famous Vincent Price is briefly in that one too, as the doomed Duke of Clarence, but Basil Rathbone's Richard III is far better than Vincent's would be 23 years later, and Boris Karloff is superbly menacing as Mord the club-footed executioner. Sometimes newer doesn't mean better.