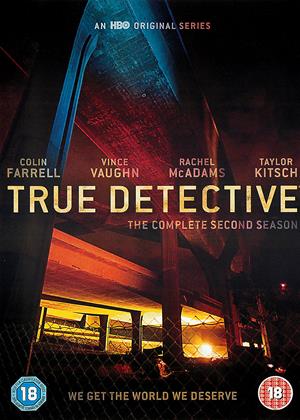 Season two takes the broad general recipe from season one, substitutes a few ingredients here and there, then throws it back into the oven to see what comes out.

Gone is the immediate, intense darkness of the first, along with the electric relationship between the two main characters which for me made it so compelling to watch. Sadly, the stunning camera and post-production from the first also seems to have been watered down along the way too; where season one plays like a collection of feature films, season two definitively feels like something made for a TV budget.

The result being that if you simply expected more of the same, you’ll likely be disappointed. However, if you can approach it with an open mind (and can sit-out the first two episodes which are painfully slow) then you’ll be rewarded with some wonderfully rich acting, dialog, back-stories and plot.

Still superb, but just a different flavour of superb...

I absolutely loved True Detective, and so I was really looking forward to the second series. This was amazingly even better. I would give it 6 stars if I could. The plot, atmosphere and characters were superb. The best performance I have ever seen by Vince Vaughan. You knew that he had to have been a bad ass to get where he was, and there were glimpses of it through the series, but while I was truly devastated by all the deaths at the end, his seemed the most poignant. I so wanted him to make it even though I knew he couldn't. Some of the best television I have ever seen. Outstanding.

The first series had Woody Harrelson & Matthew McConnaughy playing two very strong but different detectives, and played very well. Great music by T Bone Burnett, all in all a notable and enjoyable series.

This series ( we managed to watch the first 5 episodes) has, by contrast two fairly weak main characters who don't seem to develop, or show any depth of character throughout the story. the other characters are either weak or not on screen enough to make an impact.

The plot is rather moth-eaten with so many short and unexplained scenes giving the result that we couldn't understand quite what was happening much of the time, and had to work hard to piece the plot together in later scenes to make some sense.

All in all, a bit shallow and confusing but we stuck with it and managed to get to episode 5 before giving up out of sheer indifference.

After the brilliance of series 1, this is a massive let down - True Detective: Series 2 review by TB

The first series of True Detective has often been sighted as the time when major Hollywood A list talent went from working on films which tell a story in a (relatively short) space of time to long, detailed TV series where characters were able to be fleshed out and the tension slowly being allowed to build. The first series to me is perfection in every way: acting, directing, script, cinematography and soundtrack. Cari Joji Fukunaga deserves every single plaudit he has been given, as the whole series was in many ways shaped by him. The reason I mention him in this review is that, even though he is given an executive producing credit, he is on the record as saying that he had absolutely nothing to to with series 2 and boy does it show.

Series 2 has all the right elements: a talented cast, Nic Pizzolatto returns and writes or co-writes all the episodes, the budget is clearly substantial and T Bone Burnett returns to do the soundtrack. But none of it really works. It is all a mess of ideas and poor direction, with characters that you could be interested in, had they been written better. The only person who managed to me to really stand out and ironically take what is often a thankless role (a mobster’s wife) and turn it into a character who shines is Kelly Reilly as Jordan. Reilly is a very skilled actress (Eden Lake) and she brings an emotional punch to the scenes.

I have high hopes for season 3, as it stars Mahershala Ali (who after seeing him in Moonlight & Green Book, is a flawless actor) and Stephen Dorff, who has been great in everything I have seen him in. But as much as I’m glad I watched season 2 to continue the “world” the True Detective started, I cannot recommend it.