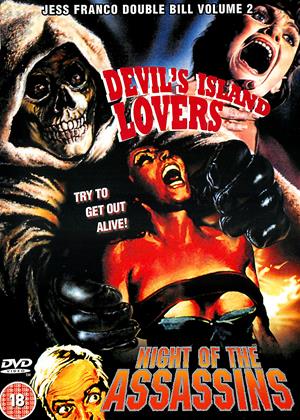 There’s a lot happening in this Jess Franco film. Set in an unnamed vicinity, Dennis Price (in his final film for Franco, and looking sun-burnt but in healthier than he had in Franco’s two recent Frankenstein films) plays lawyer L'avocat Linsday, who – describing himself as aged and alcoholic – discovers that a young couple have been unfairly convicted of murder. He is told of this injustice by former governor Mendoza (Jean Guedes) on his death-bed. Traveling to the austere and corrupt institution in which they are being held, he attempts to sort the matter out.

Usual humiliations ensue often involving fighting, torture and cruelty ensue. Raymond (Andrés Resino) and Beatriz (Geneviève Robert), the two lovers of the title, are each lead to believe their partner is dead. Beatriz’s naïve goodness puts her at loggerheads with the other inmates, whereas Raymond flirts with exhaustion and hear-death as his work pattern becomes intolerable. There’s a pretty twisted love angle involving Raymond’s affair with his godmother Emilia (Danielle Godet), which fuels her vendetta against Beatriz, whom Governor Mendoza desires. Have you got all that?

Having established Raymond and Beatriz’s incarceration as a cruel injustice, Franco’s script doesn’t seem concerned with any urgency regarding Lindsay’s mission in getting them released. Instead, we dwell more on the actions and interactions of the characters, which exploits the various layers of occasionally pantomime sadism that is part of the regular routine (incongruously involving a laser gun at one point). The finale is as low-key as you could imagine and appallingly effective. The last shot we see is of Price’s face, crumpled by disgust as he turns and walks away. Price, who died the year this film was released, turns in one of his best performances for Franco. His performances in Franco’s more bizarre films were heightened accordingly, but here, he reminds us he still has the talent that made him one of the most popular performers at the earlier stage of his career. Here’s to you, Dennis.

Interestingly, the other version of this film, known as ‘Quarter des femmes’ rejects the flashback sequences and inserts instead scenes of extra sex and cruelty, in which Libert enjoys her most substantial scene. It also adds a little extra to Lindsay’s final departure, which ends this version of the film less abruptly than the version more widely available.