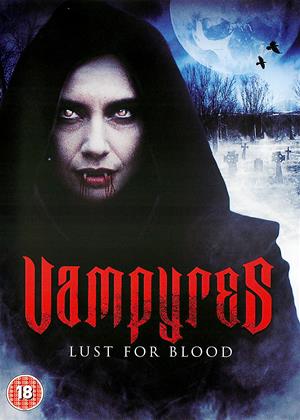 Cult classic ‘Vampyres (1974)’ is reimagined here by Spanish writer and Director Víctor Matellano. Depending on which reviews you may read, the original was either a very good or a very bad exploitation film – certainly, it acted as a series of set-pieces fusing gory horror with erotica. As such, this is a pretty faithful remake. There is no hugely involving story here, and the plot-line is spread very thinly.

Whereas the original really created a mood, with filming taking place in autumnal England, here, such skeletal trees and crisp cold colours is swapped for sun-drenched Spain and as such, the doom-laden sense of cold isolation is somewhat muted. The sprawling forests and Lakeland is beautifully captured, however – the home owned by the bi-sexual vampire girls is stunning, but contains enough shadowy crypts and huge rooms to convince as a prison. It is here that they bring their unfortunate victims.

Caroline Munro (about whom the DVD extras talk of as some kind of connection with the original film due to her work with Hammer – even though the original was not a Hammer film) is mysterious as a doom-mongering hotel owner. Her part is so sketchy however, that I didn’t realise she was a hotel owner until the credits rolled. A red herring in fact, it is nevertheless nice to see her.

The two vampire girls are every bit as stunning and sensual as the originals. Donning black capes in the daytime, they flit across barren roads and woodlands. Almudena León is despatched before the end (or so it seems), leaving her partner, the captivating Marta Flich to carry on the carnal activities alone – until the ending, anyway. Vlich in particular is hugely memorable and seems ideally suited to such roles. Indeed, her striking features adorn much of the merchandising. And with good reason; she emerges as pretty much the star of the show.

This is an almost plotless exploitation movie complete with bucketloads of blood and tacky simulated sex. The best I can say is that the location shots and the sets are visually impressive. If like me you watched it because of Caroline Munro's billing, don't bother. She appears for only a few moments. Her character isn't even given a name, just ' hotel owner'. There is a brief interview with her in the Extras menu