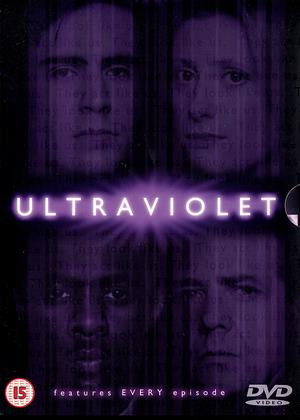 The Cheerless Vampire Killers, Or Pardon Me But I'm Just Here To Pick Up My Check - Ultraviolet review by Count Otto Black

If you missed this series first time round and don't know what to expect, the first warning sign is that the DVD was released not by Channel 4 Productions but by some obscure company I'd never previously heard of. That's a pretty strong hint that this is an unloved problem child disowned by its creators. Unfortunately it's easy to see why. In 1997 a new series called "Buffy The Vampire Slayer" was an instant massive hit in America, so in 1998 vampires were hot, though of course it would have been stupid for Channel 4 to try and make a British Buffy. Concepts that specific can only work once. So they went for the opposite approach; vampires are real and SAS-style commandos with vampire-specific weaponry controlled by a hush-hush government agency are our secret defenders against the horrific undead threat we don't even know about.

It's a great concept. Unfortunately it's handled astonishingly badly. Vampires allegedly have superhuman speed and strength, but never once in the entire five-hour running-time is this actually shown on screen. Apart from the four main characters, the top-secret anti-vampire agency is so poorly developed that I was never even sure what it was called. Those special-forces soldiers very rarely put in an appearance, and when they do, it's just a bunch of anonymous blokes in balaclavas shouting "Go! Go! Go!" while jumping out of a truck to dispatch some luckless bloodsucker in about five seconds. I never knew vampire-hunting could be this dull.

Even worse, since vampires don't kill or infect their victims except when they want to, for reasons usually involving self-defense, and the script tries to be ambiguous about whether metaphysical evil is involved or they're just people with a really weird disease, it's hard to see why they can't simply be left alone, a point the vampires themselves make repeatedly. Therefore extremely contrived world domination schemes have to be introduced to justify the good guys' ruthlessness, though they hardly need to be, since creatures invisible (including their clothes) to mirrors and all types of camera who can resurrect themselves from piles of dust are so obviously supernatural that they might as well be led by Christopher Lee in an opera cape.

The whole series is hopelessly muddled and cliché-ridden as well as being relentlessly glum and frequently tedious. The characters are cardboard cutouts who never have any fun and don't really seem to like anyone, including each other. Idris Elba in particular, as the white hero's buddy who Political Correctness decrees must be black, seems to know he's been cast purely for his colour in a show that won't get a second series, and he doesn't try very hard to act, or to give the impression that he likes his designated new best friend at all. In fact, he seems to dislike him so much that at one point he's quite keen to shoot him dead.

The uninteresting and often unpleasant cast spend far too much time dwelling on personal problems we don't care about because we don't believe in these people, if we did we wouldn't like them, and most of their angst arises from backstory we never saw that would have been resolved in a second series which didn't happen. The internal logic is so nonsensical that it sometimes manages to contradict itself over the course of one episode. And worst of all, in making it different from Buffy by removing everything that made Buffy daft and therefore fun, the writers forgot to replace those elements with things which were fun in a different way. At least it tried to do something other than jump on current teenage fashion trends and cynically cater to dreary goths, for which I'm giving it more than one star, though if this site's clumsy rating-sytem permitted I'd give it less than two. But in the end I'm afraid its greatest achievement is to show us the boring everyday reality of a supposedly glamorous profession which doesn't actually exist.