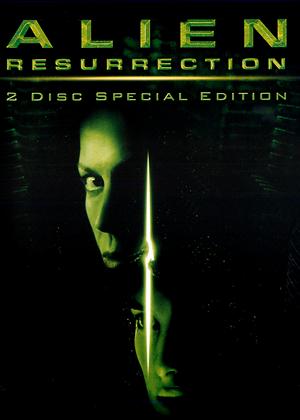 This has its fans but I find it a silly film that takes the franchise nowhere and it seems to me its a film made to cash in. Even Sigourney Weaver only eventually agreed because of the huge amount of money she was paid. The conclusion of Alien3 (1992) effectively closed the 'Ripley' trilogy neatly and conclusively, this pointlessly reopens it. As a science fiction film this has some interesting moments and the visuals are impressive at times especially the spacecraft docking sequences. But ultimately this is yet another story of humans trying to escape through a labyrinthine huge spaceship chased by the iconic aliens. In the hands of director Jean-Pierre Jeunet the film has a EuroTrash feel with some attempts at gory comedy. So here we have a story set 200 years after the events of the previous film and Ellen Ripley has been cloned by a dodgy US Military team in order to harvest an alien that is gestating inside her. Ripley grows into a sort of hybrid super powered person and whilst Weaver clearly has fun with the part it just doesn't seem like the Ripley we know who was at all times vulnerable yet had resolve. The cast are good with Winona Ryder as an android and Ron Perlman as a tough guy. But it's the conclusion that really irks, the introduction of a creature that is so daft you end up laughing when you're meant to be appalled. Well I was appalled because the film ends up as a giant joke which may have been the intention of course. Either way I think this addition spoils what was the original intention and, for me, its best ignored in the Alien franchise.

Jean-Pierre Jeunet is a very talented filmmaker, there’s no doubt about it. Over the years, he’s managed to build a unique style that not that many directors can put in their resume; with films such as ‘The City of Lost Children (La Cité des Enfants Perdus)’ and the equally grotesque ‘Delicatessen’, it’s just that Jean-Pierre was destined to succeed in mainstream cinema sooner or later (‘Amélie’, or ‘Le fabuleux destin d'Amélie Poulain’). In-between building his craft and having his big break however, Jean-Pierre made a slight detour that allowed him to helm an entry in a somewhat lucrative franchise going by the name of ‘Alien’. The result of that detour came in the form of Alien: Resurrection, a film lambasted by critics, misunderstood by casual moviegoers, and strangely enough – one that single-handedly managed to “alienate” most of the fans of the original Alien trilogy as well (full-blown pun intended).

Yet, in my humble yet irrelevant opinion, Alien Resurrection may very well be the MOST creative offering out of the four films and one that surely deserves more love than it gets as is. Let’s start from the beginning.

The original ‘Alien’ redefined the space-horror subgenre; it introduced smart, but humanely flawed characters whose only instinct was to survive an unknown predatory species (to not be confused with other franchise). ‘Aliens’ armed those characters with shotguns, semi-automatic rifles, drones, grenades, forklifts, and the power of will to persevere even when it seemed like all odds were against them. ‘Alien³’ (despite major studio interference) stripped away the horror, nullified the action, and came right down to basics: the human element of fear from the unknown. In fact, the third instalment was more about human drama and the instinct to gather in groups (tribalism) in order to survive a bigger threat than humans themselves. Alien Resurrection though? This one is all about atmosphere, strangely unique comic book characters (in a positive sense of the word), and grotesque figures courtesy of both Jean-Pierre Jeunet unique vision and H. R. Giger’s twisted imagination molded into one big biological farce (again, using farce in a positive connotation to depict a biological experiment gone-wrong).

Also, let’s pretend that ‘Prometheus’ and ‘Alien: Covenant’ do not exist for the time being, but I digress.

Alien Resurrection starts off (or at least after the initial credits) by introducing the audience with several quirkily bizarre character archetypes, including a short-fuse Rastafarian (Gary Dourdan as Christie), a bizarrely mesmerizing silent killer (Ron Perlman as Johner), a man-baby in a wheelchair (Dominique Pinon), a mysterious meek girl (Winona Ryder as Call), a hot and empathetic no-nonsense lady, and also the team lead’s lover (Kim Flowers as Hillard), and the team leader himself, the brash, street-smart guy whose deep voice could melt a bronze beam if he wanted to (Michael Wincott as Elgyn).

This unlikely team of misfits is set to deliver a stolen cargo to a corporation with a dubious history, and that’s all you need to know. The rest of the story will naturally follow.

Finally, why do so many fans of the original franchise hate this film? Well my hypothesis is that, since the majority of these fans probably reside in the States, and Jean-Pierre Jeunet is a European director with uniquely-to-him European film tendencies (take that as you will), these fans probably couldn’t connect with the direction he was taking with Alien Resurrection and therefore concluded that it’s a bad film. After all, we tend to dislike things we don’t understand, right?

Anyways, Alien Resurrection is a visual feast and one of the must-sees for anyone brave enough to call themselves a film buff.