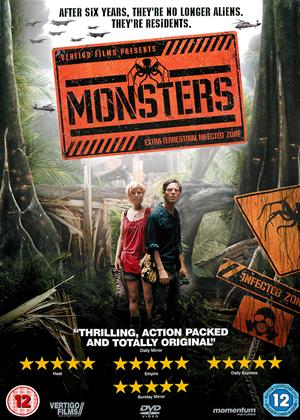 this film was very hard to get into and watch ,little happened and took asges for something to actually happen. the ending was a huge let down, just when i thought Cloverfield was bad this takes the biscuit!

Nothing much happens. Err – that's it - Monsters review by RP

I seem to have watched a lot of low-budget sci-fi films recently – Moon (man alone in moonbase), Skyline (alien invasion by tentacled creatures) and now Monsters (yet another alien invasion by tentacled creatures). Except it's not. The title is very misleading – the 'monsters' only make a token appearance and the story is far more about the two main characters and how a relationship develops between them.

The story is straightforward (?): some years previously a returning space probe crashed in central America, bringing back an alien life form. Tall, octopus-like tentacled aliens infect the area, making it dangerously uninhabitable. The area is cordoned off in an attempt to contain the aliens. But that is just background – the story itself is of a man and woman trying to make it back to the US and forced to cross the infected zone. They start out, they make it, nothing much happens. Err – that's it.

Dull movie, no thrills, no monsters. Boring – but some of the photography is good. Very disappointing – I was expecting better. But I have seen worse films so I'll give it 2/5 stars.

Never have I sat through such a load of tripe as I (tried) to make any sense of this film.

"Watching paint dry" would be more entertaining by far.

Not that bad, but not great - Monsters review by PW

This isn't a classic but I thought if entertaining enough (if you like monster films). The story is fairly simple, but that is not such a bad thing and I thought the special effects where well proportioned and not overwhelming as they are in some films.

In some ways I thought that this is actually a very well thought out film. Our 'heroes' as it were are placed in a foreign land and are desperately trying to get home. The Mexican setting which is portrayed as a bit shabby and impoverished adds to sense of discomfort that you feel for the characters and the clever use of dusty signs warning of the "infected area" gives a sense of realism to the drama of the situation that they and the people around them are facing. The film could have had a bit more pace to it and I do wish that every romance wasn't at the cost of an existing relationship which so often is the case these days but the chemistry between girl and boy is definitely there. In terms of con's, don't get this thinking you are in for a fright as I'm afraid it is not scary at all. In fact I think this may have been intentional (when you see the final scene, you will know what I mean).

Where are the Monsters! - Monsters review by CS

This film is similar in many ways to the equally trashy 'Cloverfield' or much better 'District 9'. Looking very much like a student made it as part of an art project, the story is so basic that nothing much really happens at all in the film. Male journalist is tasked with taking his employers rich daughter back to civilisation through alien infested South American jungles. Cue 2 hours of walking through Jungle and a boat trip down the river. Lots of looking thoughtfully but not very convincingly at the poor special effects, ie house/boat/car etc superimposed in tree as if a hurricane had just dumped them there, but we really know it was done by photoshop! Even the so called Aliens, which you finally get to see at the end of the film are very basic and the credits state that they were done by the Director on his computer, so how basic is that? Nothing happens in this film much and I found the acting slightly wooden, as though the actors were themselves struggling to bring meaning to a meaningless plot. I thought this was also making an attempt, just like its far superior predecessor 'District 9', at social/political commentary, drawing comparison with the conditions faced by people living in South America under current government regimes and interference by the USA. The Alien angle is really irrelevant to this film, as the story is so simple and has been done so many times before, that the characters could have been placed into any situation to act out the same scenario. All in a very boring, insipid and uninspiring piece of cinematography. 1/10

with a title such as "Monsters" you would expect there to be some in the film, but they conveniently only come out at night when you can't see them. Hmm.

I think the reason for this is that they were left over from the Kraken scene in the original 20,000 Leagues Under The Sea (1954) and remain just as convincing.

A remake with a decent FX budget- and some action- would've transformed the film, in my opinion.

No plot, no aliens, no enjoyment. - Monsters review by CP Customer

Sadly, Monsters is not another thrilling alien epic film to add the collection. It is instead utterly dull, another example of how CGI is no replacement for plot when it comes to creating a good film.

We were given very little actual background information on not only the aliens, but on the reason they came to Earth and why some people insisted on wearing gas masks and others didn't. The main actors lacked chemistry or sympathy, in particular the leading male who, despite being in a long-term relationship, thought it would be a good idea to sleep with a prostitute, steal cameras from dead bodies and, in the final scene, also get off with the main female actress too. The last romantic moment was bizarre, as the two of them hadn't so much as flirted but when they saw two aliens fling tentacles at each other in a demonstration of Monster love, they suddenly were overcome with passion enough to have a brief kiss.

As a last gripe - the aliens appeared to be little more than overland cephalopods which, scientifically, wouldn't be able to support themselves with their weedy tentacle limbs. No matter whether they are glowing or not.

All is fair in love and war with aliens.

The indie ‘Monsters’ showcases a couple who come together during an alien onslaught on Earth, specifically at the border of United States and Mexico. Photojournalist Andrew Kaulder (Scoot McNairy) is tasked by his employer to fetch daughter Samantha (Whitney Able) and bring her back to the US. As they traverse the war-torn terrain of humans versus aliens, they get to know each other and even, well, fall in love.

If you want an action-sci-fi-thriller a la M. Night Shyamalan’s ‘Signs’ or the recent hit ‘District 9’, look elsewhere. This is not your typical alien movie. There’s a Krakken-like alien pestering Earth and its earthlings, the danger is always afoot, yet its main leads Andrew and Samantha can’t help but be sensitive about feelings. The intention of making a romantic film in the vein of ‘Before Sunrise’ with aliens was intentional. Its writer-director Gareth Edwards used the alien madness as the backdrop for the burgeoning love story of Andrew and Samantha. Edwards can do this – why the hell not, but its trailer is misleading and if you’re in it for the gore, just walk away.

Yet I can’t help but give its filmmakers its quirky due. It’s a unique concept; a tad too indie for my taste but fresh nonetheless. Andrew and Samantha do a road trip per se through the chaos of an alien takeover and instead of running amok for their lives, they seem to be curious of the changes going on, taking it all in. ‘Monsters’ is a very introspective film; in the midst of uncertainty, its leads hold on to what they feel is much more true – love, humanity, the simple goal of wanting to go home. The chemistry in the film is much too real – Andrew and Samantha are played by a real-life couple – and it works well with what the message it wants to present. But I still don’t believe that in case of an alien takeover, all you need is love. I can’t eat love or use it as a shield when aliens blast at me!