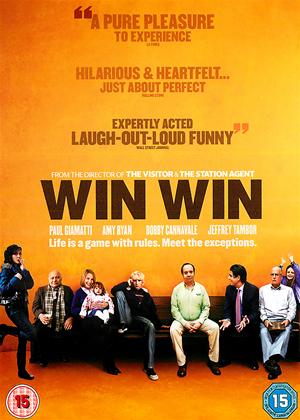 Mike Flaherty (Paul Giamatti) is a lawyer, a loving husband and doting father to two small children, but without clients and cases to work on, he has no income to speak of and as a family man, this is a disaster. Even when down on his luck Mike still volunteers as a wrestling coach at the local high school. But his dissatisfaction in life can’t even be satiated since his wrestling team is more famous for losing than winning.

To make ends meet, Mike devises a plan and it involves illegally taking advantage of Leo (Burt Young), a senior citizen suffering from dementia. As Mike secures his finances, the old man’s teenage grandson Kyle (Alex Shaffer) appears and Mike learning that the kid is good at wrestling takes him in. What began as Mike’s losing battle turns into a ‘Win Win’ situation. Or is it?

From writer-director Thomas McCarthy (‘The Station Agent’, ‘The Visitor’) comes another indie film filled with colorful characters in the pursuit of unlikely forming of relationships and accidental happiness. Subtle and not-so-over-the-top, ‘Win Win’ highlights a despondent man’s search for fulfillment. Paul Giamatti (‘Sideways’, ‘Cinderella Man’) embodies the quiet desperation of his character, having mastered this personality over the course of other indie films before.

This time, however, Giamatti’s Mike Flaherty has a sunny disposition albeit mired by dishonest practices and ulterior motives, but he manages to have the audience root for him to win. Amy Ryan as Giamatti’s wife is a formidable partner, witty and sweet but with hints of spark. Their ‘adopted’ son in the film Alex Shaffer plays his angst-y teenager low-key and it works because it’s the quiet ones that you need to look out for. His unraveling of his character Kyle is worth watching. ‘Win Win’ also wins with its other support cast: Burt Young, Bobby Cannavale, Jeffrey Tambor, and specially Melanie Lynskey (‘Heavenly Creatures’) who plays Kyle’s feisty newly out-of-rehab alcoholic mother.

‘Win Win’ is typical indie fare and indie films are almost always an acquired taste. What it lacks in style it more than makes up for in substance.