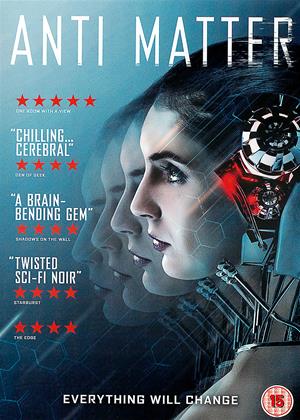 Alice through the wormhole - Anti Matter review by AS

Above average, low-budget sci-fi. Average acting and direction. Repetitive narrative but you won't fall asleep. The 'twist' ending is easy to spot 20 minutes in, especially if you notice (spoiler coming for all Lovecraft readers) on the chalkboard in the background, 'she is with Cthuhlu now,' though this is a nice touch from some rascal in in the design department who was asked to mock up a progess chart of scientific-sounding gobbledegook.

Lo-budget, lo-key, shot with little imagination and zero visual flair, this probably looked better as a script. Watch the trailer first to see what you’re getting.

This definitely has the feel of a low budget production and the one idea is not that big (or indeed believable, but this is fiction so who cares?). Nevertheless I found it an OK film to watch but there is not enough in it to make me want to watch it again.

I have some sympathy with the filmmakers given the obviously low budget, and there's no doubt that there are some interesting ideas here (though very few of them are new, in philosophy, science fiction or film) but, even when taking all that into account, this a poor effort. It's very badly scripted, as it moves between technobabble and totally unrealistic human interaction, the characterisation is virtually non-existent, and these elements in combination make it very difficult for the actors to appear remotely convincing.

There are hints of much better films here that you suspect the filmmakers had seen and wanted to emulate - 'Memento', 'The Prestige', 'The Fly' and 'Timecrimes' all spring to mind, but those films were well-paced, well-written and took one really clever idea and constructed a believable film around that idea. By comparison 'Anti Matter' has too many ideas (& characters & story threads), none of them that great or original, and it mixes them up into an unconvincing end product.

If you like the films I mention above then personally I would suggest you watch them again rather than waste 109 minutes on this exhausting and frustrating but ultimately uninspiring effort.

Must have received UK lottery funding, it's that bad. Gave up after 10 minutes after the 30th overly PC cliche, and general tedium. Very poor, don't bother. Don't remember putting on my list, think cinema paradiso slipped me a dud, and hoped I wouldn't notice. Did but can't be bothered to complain.

I am rendered speechless! - Anti Matter review by CD

Over the years I have watched some awful movies but this one takes the biscuit! The so called "story" is nothing like what you are led to expect from the maker's hype. Thee is no story! Dead in the water comes to mind. Flat, characterless people who constantly mumble so you cannot understand what they are saying. Hung in there for about an hour in the hope it might get better then just gave up.

In an Oxford University setting, the conversation between the less than brilliant researchers was rapid and gabbled. A B-movie plot ensued.