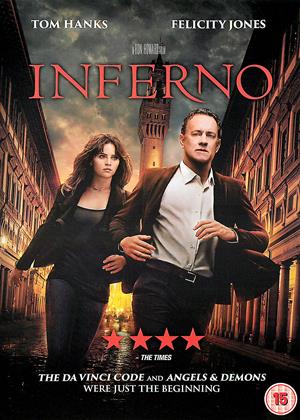 better than the previous ones. - Inferno review by CC

This latest Dan Brown adaptation has the same spectacular locations but more of a storyline and an unexpected twist. I had thought the first two were laughably poor as films but this was better.

This movie is hugely enjoyable to watch and far better than the Da Vinci Code and the other earlier movie based on a Dan Brown novel. Also I adore Florence and know it so well having holidayed there twice, so I knew all the places the film was shot on location. Also been to Venice to knew that too.

The screenplay is by David Koepp who adapted the novel into the movie Jurassic Park SO well and effectively.

Similarly, the plot here is lean and mean - not much flab on it. Some great twists, 180 degree car spins at times (and as ever in Hollywood movies halfway through the 2nd act so exactly halfway through the movie). A bit long maybe and too much is made of flashbacks and hallucinations etc.

I thoroughly enjoyed this movie. Yes, it's hokum and utter nonsense. But Tom Hanks is less irritating than usual and the plotting is clever and classy - and the film LOOKS beautiful too.

The only weird thing is this: the baddie is portrayed as someone who wrongly wants to cull the world population which is now heading for 8 billion (when it was 4 billion in 1970 and 1-2 billion in the 1930s. Now, I happen to agree with this character - world population WILL destroy us all. Already it is making most animals extinct and causing most famine, wars, environmental disasters. We MUST act now or humanity is doomed. So I was rooting for the so-called baddie in this!

Weak plot, unbelievable characters that were not developed, obvious twist and historical sites used for no good reason .

I liked the first Dan Brown which had a plot and pace that worked. the use of historical elements added to the theme and the plot. The second started to try to hard and created a nonsensical plot. This one is to formulaic lots of running and chasing for no good reason and it even seems like the author ran out of ideas for the ending, Really I don't want to spoil anything but you will question the use of a plastic bag!

Really a sad film that did not grip like the first.

We enjoyed it for what it was. Tom Hanks rarely disappoints and this is a decent movie.

Plot twists are good but I agree with a previous reviewer who questioned the plastic bag. Watch to see what we mean.

The third film based on the character of Robert Langdon from the Dan Brown novels, Inferno follows on from The Da Vinci Code and Angels & Demons. Once again, Prof Langdon must race to solve a series of clues to unravel a mystery, this time pertaining to a deadly virus which threatens to wipe out most of humanity. However, Langdon (played by Tom Hanks) is handicapped by severe memory loss and is not sure who he can trust as he races to decipher the clues and to try and remember the last 48 hours.

Directed by Ron Howard (of Happy Days fame), Inferno breezes along at a fair old pace, with some fabulous scenery, interesting historical titbits, some unexpected plot twists and is a diverting couple of hours, if little more. There is some mild violence, moderate swearing (one F bomb) and some disturbing imagery relating to the impending viral outbreak Langdon is racing to prevent, so maybe not a film for younger children.

Disappointing, cliched and yet another average movie! - Inferno review by CS

I'm not familiar with the book, having never read any of Dan Brown's novels. But having seen the first two films which received strong acclaim and huge promotion and for good reason, was expecting something better than this from the third instalment! The films starts off messily and confused with lots of camera shake and I almost gave up within the first ten minutes, but after half an hour the film improves and become simply one long chase across Europe, although most of the action takes place in Italy! The script is poor and cliched, especially at the beginning and there's very little character development, so little that the actors themselves seem to struggle to offer any sense of string acting and Tom Hanks looks like he's literally sleepwalking through the plot! I hadn't seen any publicity for this film and now I know why, I'm assuming it didn't do too well upon release and can see why! An ok, European style thriller made by Americans, but not a spot on the first two!

This third adaptation of Dan Brown’s books about symbologist Robert Langdon (Tom Hanks) starts well and goes downhill from there on. There’s a terrific prologue about the extinction of mankind due to overpopulation and an intriguing opening with Hanks in hospital, shot in the head, with no memory of what happened and with a hit woman breaking in to finish him off.

It develops into a prolonged chase around some European cities, with Hanks pursued by various bodies while he tries to decipher cryptic clues as to what’s happening. Felicity Jones is too lightweight to act as a foil as the girl on the run with him. It gets sillier as it progresses, with some preposterous plot intricacies leading to an overblown climactic set-piece that descends into pure comedy.

It nevertheless remains watchable, if not always for the intended reasons. Director Ron Howard can always be relied on to deliver a solid production, the locations look good and Hans Zimmer contributes one of his less bombastic scores. It’s a shame it’s all so ridiculous.

With names such as Ron Howard, Tom Hanks and Hans Zimmer involved in a given project, naturally you would think their finished product would be at least decent, if not else. Regrettably, the latest Dan Brown adaptation is as uninventive as it can get, offering cheap thrills and fast-paced edits that make the whole experience feel more like rehashing a made-for-TV B movie tropes in place of well-structured visual cohesion and narrative progression. Usually I tend to avoid a certain comparative approach, but this time, the book is way better.

Inferno starts well (although chaotic), throwing Tom Hanks in Medias res while his character Langdon suffers from amnesia; naturally, he doesn’t recall how he ended up in a hospital, why he’s in the condition that he finds himself into and how on earth did he found himself in Florence, Italy. Robert Langdon is also plagued by visions resembling those of Dante Alighieri’s Inferno, where various wrongdoers are condemned to eternal suffering to repay in death what they took for granted in life, and other sins. As soon as Langdon escapes the hospital together with the generic woman side character (played by Felicity Jones), things get real messy really fast.

And why does Inferno feels like it was edited on the fly, without any real visual substance to be added to scenes where a certain events with gravitas were to happen? The blame can be put on Howard, but given how much producers stick their fingers in movies nowadays – it’s not that big a surprise that Inferno looks and feels cheap after all. Add to that an indistinguishable score thrown in there somewhere to accompany an all-too-familiar thriller piece, questionable acting by all sides involved (yes, even Omar Sy), laughable coincidences that shouldn’t happen in serious films and there you have it: another decent book ruined by a quick cash grab thanks to Hollywood studios and producers.

The premise of the story is good. What will happen if Earth can no longer sustain human life in abundance? What measure will be taken by the world powers to secure that humanity will not perish? But, its amateur realization and poor execution make for a weak attempt of a story that crumbles and falls apart when (also) the ending is changed as opposed to Inferno the novel. It just doesn’t make sense and is not a logical progression that leads to a definitive conclusion.

To sum up things: Inferno abounds with weakly developed characters, poor story, sidekicks that’re just there for the ride and questionable motivations. On the technical side, it’s chaotic, frenetic and copies just about every filming cliché that ever was – but hey – at least Florence is pretty.

If you can, read the book instead.