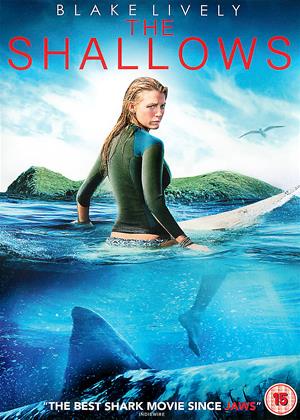 Reviews (3) of The Shallows

It's an ok thriller - The Shallows review by gazmb

I enjoyed this but still thought it wasn't as good as it could of been. Mainly about a woman who gets stranded not great distance from the shore . Taking refuge on a bouy in the water with a great white stopping her from getting to shore. I enjoyed it to watch the once.

For a relatively tight budget of 17 million dollars in this day and age I thought this film was exceptional. It is the best shark film I have seen since Jaws.

Blake Lively plays the part of a woman fighting for her life with the perfect balance of fear, panic and steely determination to try and survive. An acting performance that has to be applauded, as it can't be easy conveying these emotions with nobody to play off, except her seagull friend. She kept me thoroughly on edge and entertained throughout with her great performance.

Great direction, beautiful panoramic shots and a very realistic shark also, all adding up to a little classic.

I enjoyed this film though it's no more than a B-movie.

But the shark was lovely!

In the age of Sharknado, shark movies have become a joke. Blame the endless sequels to Jaws or the cheap format of the SyFy Channel movie of the week, but there just hasn’t been a genuinely enjoyable and terrifying shark movie since...well, Jaws. But The Shallows brings this trope of terror back to its roots with the simplicity of what made sharks so scary: they want to eat us. The shark present is not flying, nor is it robotic, nor is it moving in a pack swirling through a tornado. It’s frightening enough just to be stranded on a rock as one circles around, hungry to sink his teeth into your flesh.

When the shark takes one bite of Nancy’s leg, she finds herself struggling for dry land. She ends up on a rock, still far from the beach. It’s at this point when a lesser movie would find Nancy in a panic, lamenting about coming to beach and praying to anyone who may be listening. She’s actually smart enough to close up her wound and begin timing the movements of the shark to make her way back to shore. The unfortunate few who venture out to safe her are not so lucky, but you got to have a body count.

Director Jaume Collet-Serra is best known for his Liam Neeson productions of Non-Stop and Run All Night. Similar to those movies, he employs some visual flair with shooting that sometimes comes off more gimmicky than it should. For the first act of the movie where Nancy is mostly on her smartphone, all her electronic interactions are displayed on screen as grand holograms that appear next to the character. It’s as if he’s trying too hard to make these common applications of text, photo galleries and face-time appear more futuristic than they should be. You’re not making Star Trek here, Jaume. Thankfully, this become much less distracting as the movie goes on with Nancy relying on less technology to survive.

The plot is very simple. There’s no deeper development of character or hidden secret of the beach. It’s a struggle of woman versus shark, clean and simple. And, surprisingly, it’s an engaging bit of terror. Nancy is established enough to be an enduring character that you want to see her make it out alive in that she makes few mistakes. She has bad luck to create some tension, but is not an airhead.

Still, the movie has its moments of camp which may or may not be intentional. When the shark attacks those unlucky few who attempt to save Nancy, he does so in classic slasher fashion. Out of nowhere, the shark will pop out of the water or fly through the air to drag another human down for dinner. Nancy has one companion throughout this picture: a seagull with a damaged wing that sticks close to the survivor. He provides a decent non-verbal partner for Nancy to voice her frustration towards, but he’s unintentionally hilarious in how he just trots around dumbfounded as Nancy bleeds to death. And in the final act, Nancy’s battle with the shark turns rather personal and ridiculous to a climax that made me both laugh and clap for her victory.

The Shallows is a solid B-movie material with a bloodthirsty shark and Blake Lively looking stunning in a bikini (even if she is bleeding pretty bad from a major wound). I almost want to recommend it more just for being so well-composed and refusing to go fully over the edge of absurdity. It’s a perfectly proportioned entree of horror, fit for those who want the simple scare of being trapped on a rock as a shark circles around you. It’s no Jaws, but it’s also no Jaws IV: The Revenge.