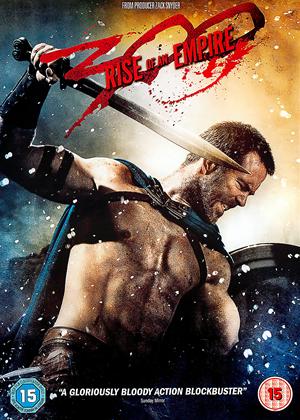 If you loved the first one like I did then you are almost guaranteed to be disappointed, a bit of a let down.

good film - 300: Rise of an Empire review by CP Customer

I enjoyed this follow up film of 300, I will say though it seemed to lack something compared to the first 300 film. I don't know why though , I did still enjoy the film.

Yet another sequel that doesn't live up to expectation - 300: Rise of an Empire review by RP

Hmmm... I liked the original 2006 film '300', directed by Zack Snyder and adapted from one of Frank Miller's graphic novels. But like so many sequels, this is yet another that fails to live up to expectation.

This time the director is Noam Murro who doesn't have Mr Snyder's track record of bringing comic-book / superhero / graphic novels to the big screen - and it shows. And I don't think the actors are well suited for their roles, either.

This episode of Greek history (well, dramatised historical events anyway) and characters is so complex that the story is told by voiceover. And although the two strong female roles are played by well-known actresses Eva Green and Lena Headey (who both provide the voiceovers) neither comes across as a 'proper' leader and neither has a particularly strong voice. This failing isn't confined to the women - the lead male role, that of Themistocles, is played by Aussie actor Sullivan Stapleton, who I remember from 'Animal Kingdom'. But a Greek war leader he is not. And NZ actor Callan Mulvey has a main role - he's not Greek either. Just to pick one other at semi-random, Jack O'Connell gets to play a role as a newly blooded young warrior - yet I know full well he's from Derby and has made his name playing young, violent, lower class tearaways. He's just not a Greek :(

The CGI effects are excellent, the blood flows freely, the violence and the visuals have a proper stylised graphic novel feel about them - but overall it feels like a weak effort.

I didn't dislike it, I was just disappointed - it could have been a lot better. I'll give it 3/5 stars and that's being very generous.

The special effect of blood spurting with great force out of every injury inflicted starts to grate on the nerves after 10 gallons. There is definitely an audience for this style of film which seems to be common in video game violent genres. How much cutting and hosing of blood can an audience manage? I don't think films are as good a setting as games.

Utterly Overblown Tosh and Hokum CGI gorefest - but enjoyable with it - 300: Rise of an Empire review by PV

This movie, like the first 300 (which is set at the same time in Thermapolae) is utter tosh - with some unintentionally funny hammed up lines in it too, so enjoy it as comedy if nothing else. However, it is entertaining though half-computer game as it's all done on green screen.

Interestingly but absurdly, the producers decided they needed female characters so rewrite history to create superwoman characters to battle the Greeks and then the Queen of the Spartans to side with them.

It is all utter twaddle but efficient at 90 minutes, and really quite enjoyable to watch for a bit of trash movie escapism. What I like is that the film doesn't pretend to be what it's not - it knows it's OTT tosh and doesn't pretend to be anything else. And it's rather well written in places too, in an overblown way.

Like the first movie, a load of gory stylized violence. If that's you're cup of tea I'm sure you'll like it, otherwise don't bother.

300: Rise of an Empire review by George Hooper - Cinema Paradiso

When Zack Snyder’s original 300 film was released it was welcomed with cult status almost instantly thanks to its unique filming style, its extravagant fight scenes and its slightly overindulgent use of slow motion and while 300 wasn’t a perfect film it had its moments. Rise of an Empire on the other hand doesn’t care so much about the little moments but it does care about keeping you entertained throughout.

Rise of an Empire follows Themistocles (Sullivan Stapleton), a Greek general who must protect his land from the invading Persian army knocking at the door. He must face a fleet of ships and thousands of men as well as Persian leader Xerxes (Rodrigo Santoro) and his general Artemisia (Eva Green), a malicious soldier and leader of the Persian Navy.

Not only does Rise of an Empire play into what viewers want from another 300 movie but it manages to keep the vicious heart of the series intact while lightening the serious nature of the story. The obscure nature of this new story benefits everyone as not knowing the outcome or the nature of this battles history adds an element of surprise and highlights a problem with its predecessor. With this new sense of uncertainty its possible to have a whole lot more fun.

The addition of Green to the series adds fresh dangers to the slow mo slashing epic and she makes Artemesia a vindictive, brutal but also playfully fun villain, a much more dynamic presence than Xerxes and the faceless immortals he commands. She treats swordplay like a dance and elegantly despatches her foes with a sense of grace mixed in with the hatred and anger.

300 may have laid the groundwork and given viewers reasons to hate the Persians or at least understand their power but its Rise of an Empire that really makes this series sing as it ignores the darker tones and brings to the surface a whole lot of fun.