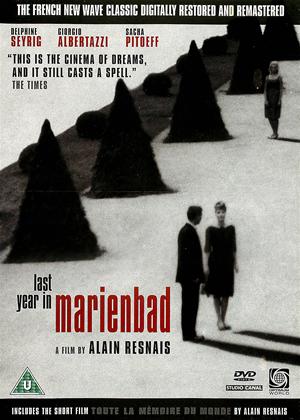 Reviews (3) of Last Year in Marienbad

This film is notorious for two things; being one of the most baffling movies ever made, and also one of the most pretentious. Which would normally damn a film to richly deserved oblivion, but since it commits both these cinematic crimes on purpose, it gets a pardon for its sheer audacity. Besides which in technical terms it's a very good film indeed, which always helps.

What may put viewers off is the unrelenting oddness. It's one of the very few movies to successfully capture the paranoid unease of those anxiety dreams that slowly but inescapably turn into nightmares. Perhaps it takes place in the same world as "Eraserhead", and while the hapless Henry is trying to cope with his mutant baby, on the other side of the Atlantic his marginally more fortunate upper-class cousins are having a holiday that isn't nearly as much fun as it should be. It certainly inhabits the same twilight zone as that oddest of B-movies "Carnival Of Souls", which is near-as-dammit a remake in the style of Roger Corman on an Ed Wood budget, right down to a soundtrack featuring almost the same relentlessly disturbing atonal organ music.

From the very first scene, in which characters who talk in an absurdly stilted fashion are revealed to be actors in a pretentious play being watched by the real cast of the film, who then turn out to behave just as unnaturally as the actors without apparently being aware that they're doing anything unusual, it's clear that something very odd indeed is going on. But what exactly? One character is obviously meant to remind us of both Cesare the Somnambulist from "The Cabinet Of Doctor Caligari" and the chess-playing Grim Reaper from "The Seventh Seal", so does it all take place in the mind of a lunatic, or is everybody dead? We are, eventually, given a strong hint that one possible explanation is more probable than any other, but it's still so full of holes that the real truth may be even weirder and totally unguessable, if there is one at all.

Although it's an extraordinary piece of work, it's not quite a masterpiece, mainly because the complete artificiality of everyone in it and everything that happens to them makes it hard to care about these people, if they are people rather than pieces in a game whose rules we're never told. Like a complex and baffling stage magic performance, such plot as there is exists purely as a framing device for the illusions, making the film so cold at heart that even the characters in it frequently mention how chilly it is for the time of year. But the web of weirdness these pawns are trapped in is so compellingly bizarre that it's no wonder numerous other movies have borrowed its stylistic flourishes, from "The Shining" (film buffs will have fun spotting all the little bits Kubrick pinched) to its alleged influence on Dario Argento's "Inferno", and distinct similarities with "Jacob's Ladder" and "Berberian Sound Studio".

Delphine Seyrig would definitely be crowned Queen of Weird Arthouse Movies if there was such a thing, having worked with everyone from Luis Buñuel to Jack Kerouac and starred in a lesbian vampire film, but this movie is odd even by her standards. Therefore it's highly recommended to anyone who loves incredibly strange films. Viewers with more conventional tastes should watch it in a group. That way, even if you hate the film, you can still have fun arguing about what it was about. But be warned: the argument may end up being quite a bit longer than the film.

Wowser’s this as to be the most mind blowing and puzzling movie i have ever seen, its a film where every single detail means something from its glorious visual setting to its odd character placement’s with their even stranger and complex dialogue but i really had no clue what was happening, it’s clear to see why the film is held in such high regard and can clearly be seen to of had such a massive influence and impact from the cinematic greats such as Kubrick stretching all the way through to Nolan.Did i like it ? visually it hit all the buttons but i was totally lost in its labyrinth of time and space and couldn’t make head nor tail of it, that was until after the film ended i watched an extra explaining at least 5 different versions/takes on what was happening through the film, talk about enlightenment i was ready to give the film a meagre 5/10 mainly for visuals but would have no trouble now upping that to 7 and damn sure this will hit the 9 position on a rewatch.Mind well and truly Blown

What was I thinking? I really enjoy things that are a bit quirky and off the wall but this was so far off the wall you wouldn't know there had been a wall at all.

My wife lasted 5 minutes before being annoyed by the interminable opening sequence. I stuck it out until there was something approaching normal dialogue, but I quickly became frustrated. I skipped forward to see if it would get any better. It didn't. In the end I ejected it and put it down to experience.

They say if you don't enjoy a book in the first 50 pages, give up. Perhaps you can also say that if you don't enjoy a film in the first quarter of an hour, give up. I don't think I give up easily and manage to keep watching things long after my wife has thrown in the towel. Sometimes, it's worth it but mostly I end up using up a couple of hours of my life pointlessly. Well, not this time!