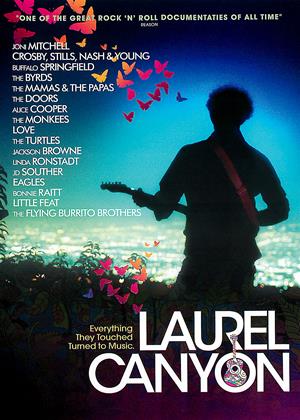 Synopsis:
"Laurel Canyon" is a two-part doc series that pulls back the curtain on a mythical world and provides an up-close look at the lives of the musicians who inhabited it. Through a wealth of rare and newly unearthed footage and audio recordings, the series features an intimate portrait of the artists who created a musical revolution that changed popular culture. Uniquely immersive and experiential, this event takes us back in time to a place where a rustic canyon in the heart of Los Angeles became a musical petri dish. Featuring the music of Joni Mitchell, Crosby, Stills, Nash and Young, The Doors, Linda Ronstadt, Eagles, and many more.
Actors:
Henry Diltz, Nurit Wilde
Directors:
Alison Ellwood
Producers:
Ryan Suffern, Erin Edeiken
Studio:
Dazzler
Genres:
Documentary, Music & Musicals, Performing Arts, Special Interest

Laurel Canyon is a location steeped in Mythology.It was a Hippie enclave of Los Angeles that is now a rich celebs playground.

In many ways this is less a story of Laurel Canyon and more about the musical phenomenon that occurred on Sunset Strip ; location that reflected a seismic musical and cultural change in America and ultimately the whole world.

Suddenly traditional elitist folk clubs had their doors kicked in by the pointed cuban heels of a new generation fired up the by the conscious lyricism of Bobby Zimmerman,the explosive arrival of The Beatles and the musical hooliganism of The Rolling Stones.

A treasure trove of a documentary featuring  Icons of Sunset Strip including The Doors,The Byrds, Love, Mamas & Papas, The Monkees, Joni Mitchell etc.

The documentary is supposedly is a testament to wannabe folkie, iconic photographer Henry Diltz,who happened to be at the right place at the right time.But the centre piece is some great music  and crazy times.

The second part of this series should have been titled 'How Cocaine and Corporations ruined the Music Business'.

It's basically the story of a bunch of faux drug fuelled cowboys known as The Eagles who decimated the heritage of the West Coast music scene with a suffocating slickness and superficiality.

Like Haight Ashbury and other culturally inspiring locations - Laurel Canyon attracted a transient caravan of artistic nomads because the rent was cheap.

people who could afford to live there.

This doc entertaining, informative  and filled with great names that will leave you yearning to hear some magnificent music.

Definitely one of the most interesting music documentaries of the late 1960s and early 1970s I have seen.  All the great LA bands, good footage, fascinating anecdotes and superb music excerpts and photos.  Bonus of seeing their lifestyles in Laurel Canyon. Highly recommended!