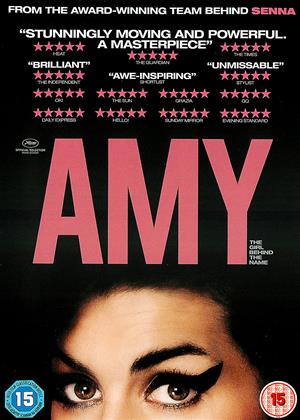 Powerfully executed and very sad as the desperate waste of extraordinary talent unfolds. The impact of the downsides of fame are clearly depicted.

Incredibly researched, as usual from this master documentary maker, this is an at times heart-wrenchingly brutal tale that will be so familiar to many. That doesn't make this lack any lunch though. I didn't know much about her story, so to have it all unfold on front of my eyes with such staggering access to home videos, snippets of film and interviews just blew me away.

What a talent. What a loss to the world. What a way for those who supposedly loved her to let her down time and time again.

The tragic tale of Amy Winehouse was one that she never had the chance to tell. From this documentary, we are reliant on her friends, family and co-worker to have her story told. We see photos and footage of a young Amy, feisty and ready to challenge the world. As the film progresses, we see that energy slowly fade as she becomes another starlet that succumbs to the intoxicating allure of fame and drugs.

What little I knew of Amy Winehouse was from the gossip rags I’d spot in the grocery store checkout and tabloid clickbait in my Facebook feed. Most of these stories were meant to marvel at Amy’s descent into addiction as the media favors with any young star gone bad. What you won’t see in those publications are the depictions of Amy as a human being that became the victim of both herself and others that did nothing to help her. It just doesn’t sell. It’s unfortunate that we only get to see the whole story in the form of post-mortem documentaries - we lament on the tragedy, but rarely learn from fame’s hideous presence that devours youth with their booze and cocaine laced fangs.

The perception of Amy Winehouse in this footage plays differently than the bad-girl drunk she was seen as in the media’s critical eye. She appears young and full of life the way she jokes with friends and hops around with energy and enthusiasm. While introducing her new place, she gives a video tour to her friend in which she pretends to be a maid servicing the house. It makes it all the more painful when the showbiz bug bites her hard as her records became smash hits. She became one of the hottest singers on the scene and burnt out too quickly. In the tradition of Jimi Hendrix and Jim Morrison, it’s another case of a fire burning half as long, but twice as bright. A great voice is silenced too young.

I must confess that I was never that big into Winehouse’s music or a listener of the 2000’s pop music scene to appreciate her talents. Her song about refusing to go to rehab just rubbed me the wrong way that I couldn’t appreciate the irony that many media junkets converged upon. This documentary thankfully displays the path that led from no rehab to rehab to death. Amy’s boyfriend video tapes her at rehab and comments on the song. Amy replies that she doesn’t mind rehab. The spunk of her charisma and humor is gone - rehab is no longer something to brush off as a setup for another award-winning song.

The documentary is kept very raw by featuring most interviews as voice overs set against archival footage of Amy. We see her as a child as her parents speak of her developing and stubborn nature. We see her goofing off in the car as her friends describe how it felt to hang out with her. The fly-on-the-wall approach allows the viewer to see the true Amy Winehouse while hearing about her from those who knew her best. It never preaches or attempts to find reasoning for how it all went so wrong. We know why Amy collapsed. There’s nothing more that can be said or done - all we can do is look back on the life of a great singer that was cut too short.

Amy respects the singer with a thoughtful documentary over a cheap Lifetime dramatization. Past all the paparazzi, gossip columns and easy jokes at awards ceremonies, this documentary reminds us that Amy was a plucky girl who just wanted to sing. The moment when she’s star-struck around Tony Bennett is an amazing scene of her being humble. Bennett speaks highly of her in the documentary in how she was easy to work with despite her nervous nature being around such an idol. But even without such a musical legend holding her up (and there are plenty to go around), the film let Amy speak for herself through her music, her voicemails and her home videos. It’s the best way she can be remembered.