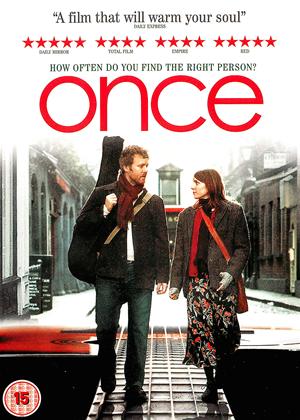 Synopsis:
Once is the inspirational tale of two kindred spirits who find each other on the bustling streets of Dublin. One is a street musician who lacks the confidence to perform his own songs. The other is a young mother trying to find her way in a strange new town. As their lives intertwine, they discover each other's talents and push one another to realise what each had only dreamt about before and work through their past loves and reveal their budding love for one another, through their songs. Once is their inspiring story..
Actors:
Glen Hansard, Markéta Irglová, Hugh Walsh, Gerard Hendrick, Alaistair Foley, Geoff Minogue, Bill Hodnett, Danuse Ktrestova, Darren Healy, Mal Whyte, Marcella Plunkett, Niall Cleary, Wiltold Owski, Krzysztos Tlotka, Tomek Glowacki, Attila Kouvacs, Sean Miller, Pat McGrath, Praghosa, Kate Haugh
Directors:
John Carney
Writers:
John Carney
Others:
John Carney, Markéta Irglová, "Falling Slowly" song; Music and Lyric by Glen Hansard and Marketa Irglova
Studio:
Icon
Genres:
Drama, Music & Musicals
Countries:
Ireland, Drama, Music & Musicals
Awards:

An Irish love Story? - Once review by CP Customer

So, not a lot happens, and you have to listen to a number of songs all the way through, so you got to like the music.And length-wise it is more like a good Play of the Month. Those are the downsides. The positives,of which there are lots, start with the characters. All likeable,well acted in the sense that you think they are playing themselves, and a story which avoids all those american "cliches".And it is happy--the humour gentle and the two central players you care for and like--you want them to make the right calls, and for God to look down and take care of them. So take it out,enjoy it and think that there have been some interesting films coming out of the ould country recently-and this is up there as one of the nicest.

An extremely potent, emotional musical about the relationship between an Irish busker and a Czech immigrant (real life musicians, Glen Hansard and Marketa Irglova), set in Dublin. It's a love story; but they are in love with other people in other countries. The film details their loneliness, and the solace their brief encounter might bring. The two stars truly create a chemistry often talked about but rarely seen. It helps to like the music: if so, the scene when Marketa sings If You Want Me to her absent husband, walking back from the shops is heart-rending.

There is a wonderful simplicity about this film, which works because the director has a lovely eye for detail, creating an intimacy with his digital camera. Once evokes that special relationship that exists between musicians, and the different language they share, and it allows us to eavesdrop on the magic that they may find together in the studio. It's a film that couples the enchantment often found in musicals, with a realistic recognition of familiar sorrow.

a lovely gentle film - Once review by OP

I really loved this film it is beautifully filmed and the characters are quirky and great. Its small story but plays out wonderfully and the acting is a joy to watch

Slow - Once review by DA

As one of the other reviewers said, you have to like the music. I didn't. And there are a lot of songs, mostly sung all the way through accompanied with pictures of the musicians playing them. Apart from that, not a lot happened. There was little conflict to drive the story. It was very realistic, like most of real life, but not very exciting. The actors were excellent but frankly I was bored.

A Nice Film - Once review by CP Customer

Nothing particulary bad about this film and the storyline is certainly engaging as the busker and Big Issue seller start falling in love. But I think there are two major drawbacks: the music is mediocre, certainly not good enough to persuade you that here is another Bob Dylan in the making; and the dialogue is difficult to follow at times. A shame, because otherwise I liked it.

A touching film but an advertorial nonetheless - Once review by AD

Loved the music and enjoyed the film. The acting was rather good and the story, well perhaps a little clichéd but also close enough to real life.