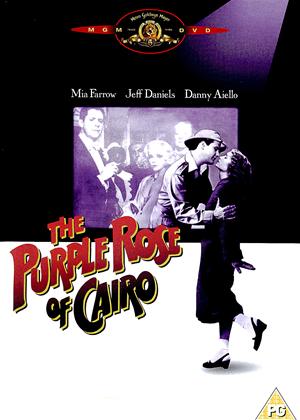 Rent other films like The Purple Rose of Cairo

Reviews (2) of The Purple Rose of Cairo

Wonderful film. Woody Allen is the best of the best filmmakers. The film is funny but not clownish and not a 4 letter word or violent action in sight. Just great.

Heartbreaker. - The Purple Rose of Cairo review by Steve Mason

A cute fantasy set in the depression of the 1930s in which Mia Farrow (Cecilia) is so starved of love that she dreams, or wills, a poet-explorer played by Jeff Daniels off the cinema screen and into her arms. As he is a celluloid character written for an escapist comedy, Daniel's clean cut adventurer is an idealised personality who must learn to live in the real world where stage money is not accepted and those provocatively dressed women are sex workers. So he can fall in love with Cecilia.

Then, in an echo of Buster Keaton's 1924 classic, Sherlock Jr, Mia ultimately enters  the screen herself, and experiences the glamour of the golden age of cinema. It is a brilliant technical feat  from cinematographer Gordon Willis, in which characters enter/leave the screen to/from the auditorium, from black and white to colour. The sets and  period detail are also exceptional.

Behind the comic and romantic premise, this is a deeply affecting work of illusion in which cinema becomes the drug that palliates the horror that is reality. If the film doesn't quite work it is because the misogynistic, violent and impoverished world that Mia inhabits is so appalling (mainly thanks to a most effective performance from Danny Aiello as her abusive husband) that it is difficult to reconcile that unease with such a sentimental diversion.

The last scene in which Cecilia has been let down again so badly that she struggles to slowly lose herself back into the screen again, in a long close up while Fred and Ginger dance in Top Hat to Cheek to Cheek, is a heartbreaker.