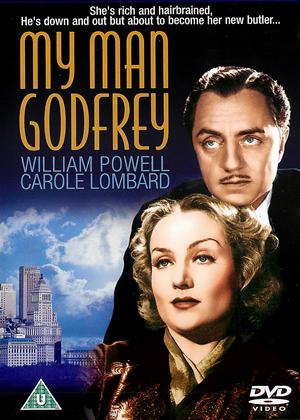 Reviews (1) of My Man Godfrey

My Man Godfrey captures the spirit of the great Frank Capra. A party of socialites are entertaining themselves with a scavenger hunt among the homeless of New York. Irene (crazy Carole Lombard) explains this 'is exactly like a treasure hunt, except in a treasure hunt you try to find something you want, and in a scavenger hunt you try to find something that nobody wants'. And so she attaches herself to 'forgotten man' Godfrey (William Powell) in perhaps the most cynical ever meet-cute in pictures.

Godfrey becomes the butler to the anarchic Bullock family. The father (Eugene Palette) earns big in the stock exchange but his dependents spend it even bigger. Mrs. Bullock (Alice Faye) is just hopelessly ditzy, a model for Irene whose featherbrain at least reveals a kind heart. Mrs. Bullock's protege/gigolo is Carlo (Mischa Auer in a brilliant comic performance) who is supposed to be writing an opera but is just freeloading. The dangerous sister is Cornelia (Gail Patrick), the sort of privileged, insulated American who may turn to political extremism. This is 1936.

The butler survives the family, and inevitably saves them, teaching them humility and (by implication) the value of Roosevelt's new deal. As Godfrey, William Powell is sensational, both brilliantly hilarious, but with an underlying dignity which is never tarnished no matter how reduced his circumstances: 'The only difference between a derelict and a man is a job'.

My Man Godfrey is fabulously funny, and heartbreaking too, and miraculously manages to avoid sentimentality. But it is also a romantic comedy and (the recently divorced) Powell and Lombard are adorable as the very odd couple. This film was made by Universal, the house of horror, and is most untypical of their output. Showing how dominant the screwball comedy had become, and how adept it was at reflecting America back to itself.