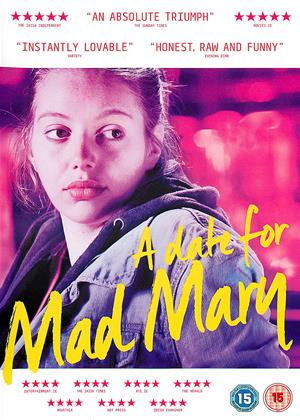 Rent other films like A Date for Mad Mary

Reviews of A Date for Mad Mary

Lovely, charming and full of honesty and heart - A Date for Mad Mary by Darren Thornton is an Irish piece of cinema brilliance that tells a quiet, nifty story about a certain girl Mary and her trials and tribulations after a short stay spent in prison. In it, everything works and not one part misses the whole. In short: A Date for Mad Mary starring Seána Kerslake, Charleigh Bailey and Tara Lee comes off as the penultimate introspective film waiting to take his crown among other jewels of the same category.

A Date for Mad Mary is an adaptation of a theatre play called 10 Dates with Mad Mary by Akram Yasmine, who also stars in the third series of none other than Sherlock itself. That however doesn’t stop Darren Thornton from achieving the impossible and breaking the barrier that holds such adaptive pieces back – never letting them flourish as their own separate entities.

Not so much with A Date for Mad Mary.

The story sees one Mary after serving a short-lived spell behind bars and returning home in Drogheda, Ireland where everyone has changed. Old faces now radiate new glow; peoples’ characters’ changed; the life as Mary was used to is now forever gone. The previous screams with melodramatic tendencies, and in the hands of a lesser director – it would probably be so. But a clever screenplay from Colin and Darren Thornton elevates the film on a whole another level without it taking an easy route out.

As Mary returns to her former life within the confines of her mother and father’s house, she is also changed as a person. Changed to an extent that she recognizes her personal flaws, but doesn’t put much effort into recognizing the flaws of others. And so Mary McArdle ventures further into romantic territory.

Her first or so dates with the opposite sex end up disastrously funny and put Mary on the verge of giving up on dating altogether. Thankfully, her former friend Charlene embraces her odd side and follows up with several other that are so-so in comparison with the previous ones. Needless to say, Mary feels as lost as ever; in fact – she feels as if her place is not among the Drogheda citizenry.

Furthermore, A Date for Mad Mary’s charming nature helps it stay on top of its game; and its game is, well, delving deep into Irish stereotype of character and deconstructing said stereotype in the best of director Thornton ‘s abilities.

A Date for Mad Mary portrays the hardships in life without it relying too much on melodramatic tendencies lesser “drama” pieces so often succumb to. To this extent, A Date for Mad Mary is worthy of your attention one way or the other.