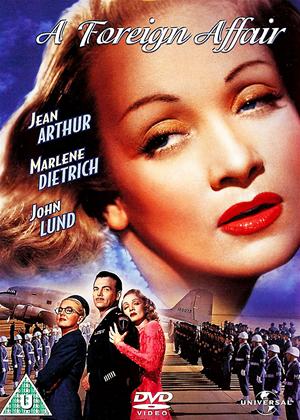 Reviews (2) of A Foreign Affair

A Foreign Affair is classic Billy Wilder, but rarely screened and too little known; a near remake of Ninotchka, also scripted by Wilder and Brackett. Jean Arthur is a sober, straightarrow Senator from Iowa who flies into the ruins of postwar Berlin to investigate the behaviour of US soldiers in occupation. Only she falls in love with the biggest transgressor,  Captain Pringle (John Lund) who is now keeping Marlene Dietrich, the mercenary former mistress of a leading Nazi, in soap and coffee.

The Senator is a moralist, who works by the rules. She learns the facts of life in Berlin soon enough, and discovers her own humanity in the process. The city she finds is one where people do what they can to survive, and dignity and self respect are the commodities that Berliners can least afford.  This is only Wilder's second comedy, and began his trait of attributing a cynical humour to a scenario more typical of melodrama. Here, the destruction of Germany, and its lingering fascism.

Perhaps surprisingly for a director who fled the Nazis and whose mother died in a concentration camp, Wilder shows pragmatic sympathy for the survivors of the bombed out city, as well as broadmindedness towards the unethical behaviour of American soldiers. The comedy gets progressively bleaker until it becomes quite noirish towards the end, a style in which Wilder was equally at home.

As Congresswoman Phoebe Frost, the ice maiden who thaws, Arthur lacks appeal. Lund is believable, but perhaps wants for charm. But Marlene Dietrich is sensational, most indelibly in singing three downbeat, sardonic cabaret numbers by Friedrich Hollaender. Wilder and Brackett give her some persuasive poetic dialogue. It's hard to imagine the film could succeed without her.

interesting piece of history, - A Foreign Affair review by pete b