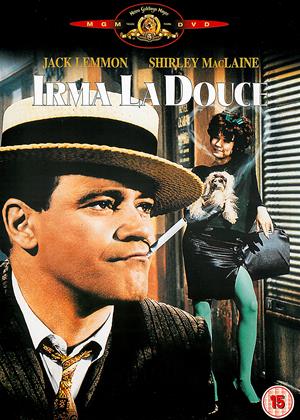 As the Narrators intro at the beginning could clue us in, this is a ‘tall tale’ in the vein of 'Baron Munchhausen' or 'The Grand Budapest Hotel'. From the same creative team behind 'Some Like It Hot', Wilder, Lemmon & Diamond, this takes the successful elements of ‘The Apartment’ and that film and revisits the success of both. The chemistry between the two leads from 'The Apartment', Shirley Maclaine & Lemmon, is as strong here as in the earlier Oscar winner, but with the addition of the sex-appeal and set-pieces of the legendary Monroe smash. This time, a busty Maclaine plays the sexy Gold-digger-with-a-heart-of-gold while the ‘Cary Grant’-alike we remember from Tony Curtis is encore’d here by Jack Lemmon’s ‘English Lord’, right up to the seduction scene. If it is a tour de force, the force being Jack Lemmons personality, it must also be said, the whole is shoe-horned into a slightly overcooked souffle which ends up taking 2 ½ hours to get to the table. Even so, there’s still more to keep us filmically entertained. There’s a rousing musical score under Andre Previn, there are sets from Gay Paree as lavish as any musical, and the flat-out gorgeously coloured technicolour is ‘to die for’ in place of the moody monochrome of both earlier works. Be sure to check out the flashes of emerald green in Lemmons wedding suit! Allow your eye to wander at length over the rich multicoloured paisleys in the hotel room with 'his Lordship'. Irma’s apartment is convincingly up multiple flights of stairs (if you have been to Paris you will know!) but notice the eye-catching bedhead as the centrepiece of a wonderfully modern-looking shabby-chic décor.

Ultimately it is the jokes that one misses, though this third offering has its moments:

Maclaine: (after telling Lemmon to move in) What? Don'cha like the idea?

Lemmon: I like the idea I just had no… idea

Lemmon ( after claiming delay due to fog) is accosted by Maclaine:

Something different about you… wasn’t that patch on the other eye?

Lemmon: Oh yes, right (swaps the patch). No wonder it was foggy!

'The Apartment' and even more so 'Some Like It Hot' had a verbal quick-wittedness which keeps the first fresh on viewing today and the second central in ones affections over the years. Irma La Douce is required viewing for those who care to witness Jack Lemmon’s talents on full show, but like a souffle, it is unlikely to live on in the memory as one of the great meals, unless as part of a wider confection.