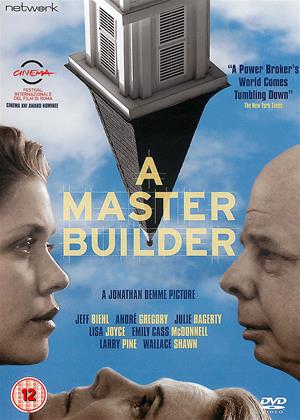 Reviews (1) of A Master Builder

A High Achievement. - A Master Builder review by NC

One more ascent up the towering edifice that is 'The Master Builder'. Another attempt to reach one of the highest peaks of western civilisation. this is a very fine, very brave translation/adaptation/production which throws out new insights and new talking points, whilst crucially respecting the original.

Wallace Shawn is on form as Solness, capturing the transition from an all-powerful, never-to-be-argued-with demigod, to an acolyte of the mysterious Hilde, agreeing with and agreeing to every word she says, even when it heralds his own demise. Being asked to believe beautiful women lay themselves at his feet risks credibility - but let that one go. Lisa Joyce plays Hilde for the most part with great skill, but for some reason I cannot understand she is asked to emit bursts of hysterical laughter. This is all the more puzzling as in this production she is not a 'real' character, but a mystical, angelic being, someone in the mind of a dying Solness.

A shelf-full of books could be written about this one play. Facets ripe for discussion include whether Solness did in fact sexually assault Hilde when she was only twelve years old, and how may that have affected her mentally since. The deterioration of Solness's marriage may have more to do with his own selfishness and ambition than with the death of young twins, and how he thinks his wife has borne this loss. Is Solness THE Master Builder, the Creator, who no longer builds churches, and has one last palace in the sky to erect, for Hilde, for himself, before Ragnarok- the end of the world. (His apprentice, who is ready to take over from him, for whom he is asked to step aside, is called Ragnor). There is a slice of social history to consider as the rise of humble Solness is at the expense of his wife's family estate. And then there is Hilde - one of the most difficult characters in literature to pin down: real or imaginary? Someone who forces herself into the master builder's home like a whirlwind, but is just as unattainable.

Ibsen was one of those rare wonders, far greater than the average genius. To put on a play like 'The Master Builder' is a daunting prospect. This, with just one or two reservations, is a brilliant venture.