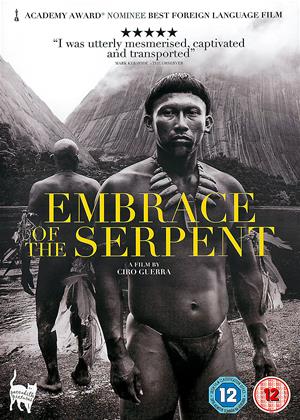 Synopsis:
Karamakate, a warrior shaman and last of his tribe, transcends the worlds of men and seeks truth through their dreams. He alone knows how to find the mysterious and psychedelic Yakruna plant; for some it has life-saving properties, for others it is a commodity waiting to be exploited. Two scientists, in two different times enlist Karamakate on their individual quests in an epic adventure into the heart of the Colombian Amazon to find this mythical plant. This Oscar nominated film is seen through Karamakates eyes and bears witness to the effects of colonialism, religion and the exploitation of rubber on indigenous traditions and the environment to which they arc inextricably linked.
Actors:
Nilbio Torres, Jan Bijvoet, Antonio Bolivar, Brionne Davis, Yauenkü Migue, Nicolás Cancino, Luigi Sciamanna
Directors:
Ciro Guerra
Producers:
Cristina Gallego
Writers:
Ciro Guerra, Theodor Koch-Grunberg, Richard Evans Schultes, Jacques Toulemonde Vidal
Aka:
El abrazo de la serpiente
Studio:
Peccadillo Pictures
Genres:
Action & Adventure, Drama
Countries:
Colombia, Top 100 Films, Action & Adventure, Drama
Awards:

Reviews (4) of Embrace of the Serpent

This is a fascinating and unusual film. Based on the diaries of the 2 German explorers featured - which describe some tribes now vanished forever. There's plenty of rainforest here, rubber barons, warring tribes and also tribal traditions, a 'Heart of Darkness' moment of 'Apocalypse Now' proportions.

This can be paired with APOCALYTO maybe. Also the true story THE LOST CITY OF Z.

One issue with these sorts of films is they often idealise native cultures as being Utopian and ideal in harmony with nature and peaceful, when they were anything but - as scenes in this movie make clear.

This maybe too slow for some but I enjoyed it and the black and white photography.

A carefully crafted masterpiece - Embrace of the Serpent review by PM

The genre of this film has been miscategorised in my opinion. If you are looking for an action/adventure movie, like it says on the box, you will likely be disappointed. It's more of an enquiry into a true story of colonialism, with the advantage of cultural hindsight. If you are at all interested in Jung's ideas of the collective consciousness and symbolism, you will find a feast here. I watched it 3 times during my loan period and it just got more interesting with each viewing. It has a more than passing similarity to Jim Jarmusch's "Dead Man", though without the distraction of Johnny Depp.

Excellent film. - Embrace of the Serpent review by SD

Just rewatched this on blu ray (I saw it at the cinema) Excellent film. Engrossing and surreal (definite shades of Werner Herzog and Stanley Kubrick), with a compelling narrative and some incredible imagery. Worth checking out.

Com ce com ca - Embrace of the Serpent review by BE

Authentically filmed in the jungle and mangroves of South America but unfortunately, not my cup of snake venom! A simple tale, albeit a trifle long. Well acted, especially by those who looked indigenous to their surroundings. It wasn't clear that the film involved two different historic periods. I found out after I had finished watching it although it wouldn't have enhanced my enjoyment (or not) of the film.

Embrace of the Serpent is a magnificent piece of ethereal, surreal film-making that makes me glad the media still nurtures art among the wreckage of contemporary, blatantly obvious CGI-ness and superhero over-saturation. It is a quiet, yet still powerful enough to resonate within the confines of one’s own beliefs and moral values, and for that alone, it is a worthy testament of the human footprint on our planet we call Earth.

The movie’s narration splits into two different paths: both based on two different expeditions conducted in the Amazon rainforest, set apart by more than 30 years’ time. The first one sees Theodor Koch-Grunberg, a German adventurer and scientist, while the second follows American Richard Evans Schultes – in their quest to find the mystical Yakruna plant, the one that is believed to have the ability to heal physical and spiritual wounds. What connects these explorers is a Shaman named Karamakate, who does his best to preserve the interests of his employers, but also holds dear the Yakruna secret which is believed to be the last remaining symbol of independence his people have left.

The cinematography is chosen precisely to build upon the mystical motifs of the narration, and in this regard it immensely succeeds. The richness of pictures and stills is accompanied by linguistic abundance – with nine languages present in the film which are spoken during different revelations about the nature of reality and the introspection of the self – perhaps two sides of the same coin called life.

Sounds and music include chants and native rituals that are deeply ingrained in how one perceives the self, superimposed onto beautiful and vast landscapes that elevate the experience to further heights. Add the fact that the feature is filmed on location in the Amazonian rainforest, the first one in 30 years, and you start to enter Karakamate’s perspective of why he thinks the ‘white man’ disturbs the flow of the jungle. He is channeling the natural, almost spiritual dimension of human beings, while Theodor and Richard come as the uninitiated ‘outsiders’ which must pass Karakamate’s test of resilience to find out if they are worthy for the flower. It’s a beautiful play of opposites similar with those in lyrical poems that lead up to emotional catharsis of both the soul and the body.

Embrace of the Serpent is at its peak when the occult happens, when our heroes lost in space and time finally realize the true power of their will. The shaman is their guide, teaching them to accept the inevitable and to disrobe themselves from the materialistic burden their societies so frivolously advocate.

In a word, Embrace of the Serpent is an awesome initiation happening from the confines of one’s own home. Without getting into these dangers however, one cannot truly become pure and worthy of the powers Yakruna holds.