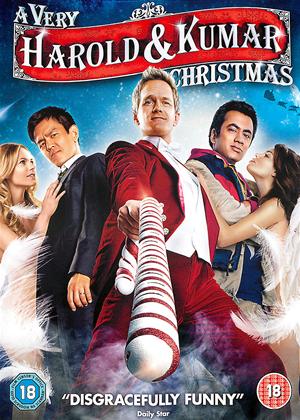 Rent other films like A Very Harold and Kumar Christmas

Reviews of A Very Harold and Kumar Christmas

Stoner comedies – meaning: excessive recreational use of marijuana on film – are riots when you watch them high and you have an open mind (maybe even your third eye.) The third in their own series of stoner movies, ‘A Very Harold and Kumar Christmas’, checks every item on the gross-out, unapologetic, un-politically correct, and hallucinogenic list and more. You should applaud them for staying true to their disgusting ways.

In their Christmas movie, Harold and Kumar are literally reunited for the yuletide season. Although they consider themselves high best friends for life, they’ve grown apart – big time. Harold (John Cho) is now a married man with a Mexican wife dealing with her very Mexican father (Danny Trejo) and family during the holidays. Kumar (Kal Penn) is still the same: a single pothead living in a ramshackle home. They've even acquired new best friends of their own, but this is ‘A Very Harold and Kumar Christmas’, the lukewarm BFFs must join in the shenanigans together. Well, that’s that. If you’re looking for a story, go somewhere else.

Harold and Kumar for all intents and purposes is an eff you to moviemaking in Hollywood per se. Consider this they are Asian-Americans, one of Korean descent, the other Indian. How many movies can you cite that have them as leads? That don’t portray them as either math or science geniuses? That they eat dog or curry? And best of all, they’re admitted practitioners of smoking a joint. They’re ordinary Americans.

If you don’t want to accept it, tough. Neil Patrick Harris (known in the ‘Harold and Kumar’ universe as womanizing NPH) brings his brand of salacious comedy yet again, he’s like the Third Beatle already, and it’s hilarious. NPH is an out and proud gay man and yet he lusts after women, saying being gay is actually a cover for his straightness. It’s so ridiculous it’s funny, so do what you will with this life-changing info.

For its 3D version, ‘A Very Harold and Kumar Christmas’ will literally throw all sorts of nasty stuff at you. So get ready.