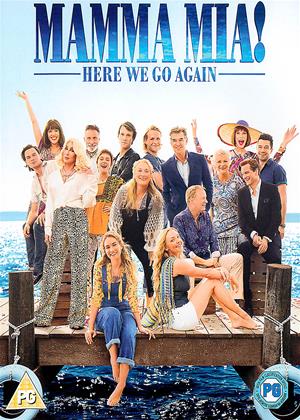 Rent other films like Mamma Mia! Here We Go Again

Awful, must be the worst musical ever! - Mamma Mia! Here We Go Again review by CS

Whilst the first film was brilliantly well crafted, full of great tunes, good dance moves and had a warm heartfelt light bouncy commercial appeal. This follow on is just dire and clearly made to cash in on the Abba franchise, rather than for any artistic value or merit! The first film, being based upon the stage play, had as a result, years of evolution, experimentation and tweaking behind it, which in part was the reason why the first film was so good, however this second film comes across as badly made, on a budget, within a squeezed timeframe. The theme is basically one women, goes on holiday to Greece, sleeps around with three different men, gets pregnant and doesn't know who the father is, so really sets a very bad moralistic example right from the start! However instead of recognising this fact and teaching young people that they need to take responsibility for their own actions, this film seems to take the current feminist trend for men bashing to extreme and blame the men for every bad decision the woman makes! As a result it becomes a classic example of feminist propaganda, is full of very sexist comments and put downs towards men, whilst all the main female characters act and behave like cheap sluts. Whilst there are a few of Abbas big hits thrown in, most of the songs are lesser known tunes, B-Sides and Album tracks. Cher is completely mis-cast and only appears towards the very end of the film in more of a cameo role and I'm guessing the only real reason why she is in the film, was to promote her album of Abba over versions! It's quite clear that the main target audience here is women, but unlike the original, this comes across as less of a holiday romance musical and more of a vehicle for feministic men bashing. I thought that it was a very thin and weak storyline, most of the sings simply don't work and are very badly placed and the singing is awful, mostly off pitch and out of tune, all in a very badly conceived and produced poor effort!

Under the fun something lurks - Mamma Mia! Here We Go Again review by ER

It's all great fun, with songs, dances, and bright-toothed smiles, even if the first half drags a bit with some of Abba's second-rate numbers sneaking in. Cher's terrific cameo at the finale saves it, and she appears like a goddess (check the credits for her wig maker and personal voice engineer, two great technicians).

As well as the sing/dance/have fun message, there seem to be some disturbing lessons. No.1 is -- judge people by first appearances, and if they are attractive, have sex with them as soon as possible. No.2 is -- don't do what you SHOULD do, don't even do what's BEST FOR YOU, instead, do what you FEEL. These are lessons focused on short-term satisfaction and long-term life disasters. Adults will naturally see the fantasy of this, but Mamma Mia is not a suitable film for children.

A follow-up too far - Mamma Mia! Here We Go Again review by AB

Unfortunately, this sequel falls into the 'inferior to the original' bracket. We found the storyline unconvincing. The cast, apart from Lily James, seem to be just going through the motions. And of course, most of the best Abba songs were used in the original. Sadly, the joie de vivre just ain't there. Oh, mama mia, what have they done!

Better Than I Expected - Mamma Mia! Here We Go Again review by KW

Not a classic, but was better than I expected, but with all the best tunes in the first film it was always going to be hard to make them realistic. The appearance of Cher towards the end of the film did add some impetus to it but the script was to thin to make an outstanding film!

This film pales badly in comparison with the original. Poor story line, unenthusiastic acting. It just lacks freshness. I thought it was boring but some might like it for the songs and the sunshine.

Not worthy of a sequel - Mamma Mia! Here We Go Again review by TL

Pretty to look at. Packed with well known actors - shame they don't have much to do. I love the idea of going back Into Donna's life and tying that in with her daughter's story. It does get a little muddy, but generally well told.

Meryl Streep sings a song with Amanda Seyfried towards the end of the film. It is beautiful and very moving - a hymn to mothers and daughters.

Cher is Cher and does not add much to the film in my opinion.

A good bank balance was had by all. - Mamma Mia! Here We Go Again review by NC

Lot of cash spread about in this one. Somehow they even got Streep back in for a few minutes, for a few mill. Almost embarrassingly cringeworthy in places.

Absolute bilge. Looks like it was Just made for the money. I'm really glad I didn't pay to see it at the pictures.

An all time record - I stopped watching it after 5 minutes! What a load of mindless pap, designed to appeal to the lowest common denominator.....

Oh - I thought the first film was uplifting and brilliant and I loved the music; this is just terrible - don't bother!!!

Just couldn't get to grips with this, I gathered where the story was going very early on. Stopped watching after about 40 minutes, but saw the trailer and i think that covers in. Enjoyed the first one, if couldn't stand this one.