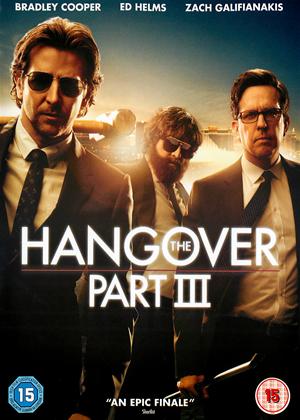 Reviews of The Hangover: Part 3

The Wolf Pack are back for one last adventure and this time it doesn’t involved heavy drinking. The story is different, the hazy morning of ridiculous antics gone and this conclusion to this unconventional trilogy feels like a better, funnier version of everything that came before it. Yet while The Hangover Part 3 is the best of the bunch its still comically tone deaf for the most part.

The film follows Stu (Ed Helms), Phil (Bradley Cooper) and Alan (Zach Galifianakis) as they are sent in search of Mr Chow (Ken Jeong) when a deadly drug dealer (John Goodman) kidnaps Doug (Justin Bartha) and demands the Wolf Pack bring Chow to him. The trio find themselves doing things they never would imagine for a third time.

While the plot change freshens up the antics of these inept fools, the film still suffers from the same problems as its predecessors. It not only lacks any kind of logic but all the jokes are rammed down your throat. Galifianakis forces every word coming out of his mouth as Alan becomes even more likable than he was in the original. Helms manages to play straight laced Stu well enough to earn a few decent laughs and Cooper is a reliable everyman but most of the films dialogue and actions come from Alan and he proves unwatchable.

The whole thing feels like director Todd Phillips way of just getting it over with, a conclusion without the wrap up with a group of man children running around crashing their way out of trouble into more trouble. Some may argue that’s the whole point but I choose to believe characters can get themselves into uncharacteristically dumb situations thanks to believable actions, not what looks good.

Point in case the film finds Stu trying to shut off an alarm system by pretending to be a dog for no real reason besides the face it could at some point have been amusing in writer Craig Mazin’s head.

It isn’t a disaster, it isn’t even a train wreck but it’s a shoddy way to wrap up a pointless and oftentimes irritating trilogy.