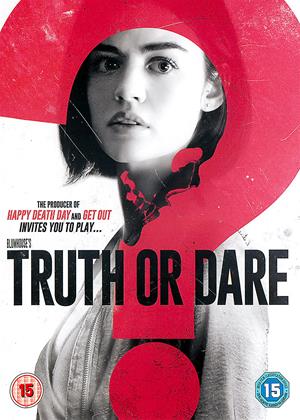 Reviews (2) of Truth or Dare

Truth...maybe i shouldnt tell you . - Truth or Dare review by porky

Daft people get involved in a demonic game of dare . upset one another with Truth telling and people die from stupid Dares .

has the feel of a good movie like Final Destination at first but really hasnt the sustaining power to keep it up and it just gets silly .

In the end you dont really care much who lives or dies.

A standard horror thriller where a group of naïve students get lured into playing a game in an ancient, dilapidated church in Mexico and find that a demon forces them to continue playing or face instant death. There's the usual grisly scenes and the inevitable search for a way out but all in all the film offers little that's new or original. Indeed in many respects it's a mediocre affair and has a lacklustre ending. There's been a lot better films built off the same idea.

For as dopey a concept as it may seem, there could have been some potential to the concept of Truth or Dare as more than just a deadly version of the childish game. Think about the concept of how characters are forced into telling terrible truth that reveal their darkest secrets. Of course, in order for that type of film to work, you’d need to have some very unique players for the game. Unfortunately, slasher logic for a childish game requires childish characters or, in this instance, boring college students.

A slew of college students come together for a party in Mexico. Standard horny teen tropes apply with plenty of dancing, drinking, sex, and drama about who is sleeping with who. Then the group grows bored and decide to play a game of truth or dare, posing awkward questions of murder scenarios and who is cheating on who. Since the game is too boring, as are the characters, in comes a Mexican curse to make the game a little more interesting. The game, which continues long after the Mexican trip, now involves some demonic force that makes random people with visual-effects smiles ask the question of truth or dare to the players. And just in case nobody is around, messages of truth or dare are written on paper and on arms. Good to know this curse is bilingual.

To avoid the curse making the players forcibly kill themselves, the players are expected to either blurt out a terrible truth or perform some ridiculous dare. Failure to commit or telling a lie results in death most underwhelming, usually involving a stabbing to the eye, a snapped neck, or a tumble off a roof. And so the killings continue until this collective finds out the secret of this curse and how to break it.

Now imagine if those cursed with the game of truth or dare actually had something unique to get off their chest. Even college students could have a lot of truths that are most intriguing when a demon seeks them to be shouted at the rooftops. But what few secrets they have results in little more than turned heads and easy admissions. One character admits to knowing about someone else cheating with little more than typical bickering. Another will come out as gay to his father and there’s little conflict with this admission. And another has been writing phony prescriptions with his medical studies, making for an awkward interview. Or at least it would have if he didn’t lie so I guess it’s a pen to the eye for him.

Truth or Dare is an entirely self-absorbed horror-mystery that weaves characters we care so little about it’s not the least bit shocking they don’t sacrifice themselves to drop the curse. They instead spread it to the entire world, via the internet with a video everybody watches, so everyone will have to be truthful or die. At least we know for sure there won’t be a sequel, transforming the planet into a paranoid society of truth-telling and fear of demons daring us. That type of Twilight Zone-style terror is far too ambitious for a sloppy concoction of truth or dare, horror edition.