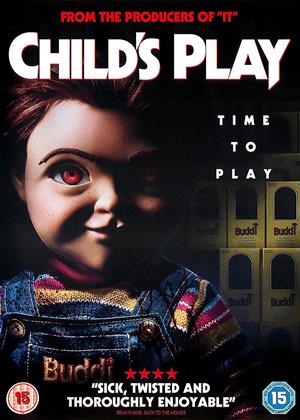 im a big fan of the original childs play films.

this is a proper remake so you need to try and watch it as a different stand alone film.

i like that fact they didnt copy anything from the original. this is deffinatly an up to date version which should keep the new generation of watches interested. I liked the new take on it.

the new look of chucky took a bit of time getting used to but again was good they didnt use the exact same doll.

im sure any horror fan will like this as long as you dont compare or expect the original.

This was more a Completely New Film than a re-Boot of Child's Play. Beware SPOILERS included in review .

There was absolutely NO Reason to even name it 'Child's Play' other than to get Free Publicity for it from a Backlash from Chucky fans .

Clearly the ONLY reason they tagged it onto the previous franchise as it has Absolutely No Link to that story at all.

Deliberate Softwear Corruption by a Disgruntled Factory Assembler sets the Doll off on a Learning Curve without limits ,Sadly for the Doll its owner is a nasty Childish BRAT, so the Doll Learns Terrible things .one of which is How to Kill.

If His new owner Andy wasn't such a Bratty Little Sh@t ,teaching him All the Worst things about Humanity, 'Chucky ' would never have been a problem.

Who really is the Monster Here ? in my view ANDY .

Chucky only knows what he is taught .

My initial reaction to a reboot of Child’s Play was to scoff. The series had been progressing down a pleasingly campy route with the same writer on every film. That chain is then broken by an obligatory remake that distances itself from the series helmer, replaced with a slicker and updated rendition of the killer doll trope. However, once distancing myself from the whole breaking-cannon fan demeaning angle, I must admit that this iteration of Child’s Play is pretty clever on its own terms.

There’s thankfully a lot more to this version than merely repeating the pattern of the first film, which relied on the suspense of whether or not a doll was causing violence and terror. The Buddi doll of this film exists in a world of conglomerate technological modification with the doll being a tool. The Buddi doll can now sync with the cloud, has more complicated facial features, and automates everything like a walking/talking version of Amazon Echo. That alone is terrifying but, wait, there’s more! Buddi is said to come installed with safety restrictions to prevent it from breaking those old Asmiov robot laws but what if that programming was altered by, say, a vindictive programmer in China who was fired for unlawful working conditions?

That’s plenty intriguing but it doesn’t stop there. Naturally, this means one of the Buddi dolls will malfunction and the technology will go awry. For the entire first act, the sentiently evil doll of Buddi who chooses the name Chucky is gifted to the pre-teen Andy. With a single mom and her aggressive boyfriend, Andy could really use a friend. Chucky ends up being just that, despite malfunctioning slightly due to his faulty programming. The previous Child’s Play movie worked under the premise that a serial killer is possessing a doll. Here, the doll is essentially reprogrammed to take the wrong messages from the information it takes in. So when Andy is scratched by the cat, Chucky’s instinct is too kill the cat. What’s unique is that Chucky is not doing so to destroy Andy’s life but to make it better for him. But with enough bad influences at Andy’s age, it’s easy for the doll to go evil, especially when his peers teach it to stab things.

One area where the film exceeds over the competition of the previous picture is the very concept of a creepy doll. Creepy dolls on their own are not too terrifying in terms of the slasher genre. They’re small, fragile and you can kick them. With the technological influence in the character, albeit seeming standard for a modern reboot, Chucky is now far more intimidating. He can record audio to incriminate and provoke. He can control the temperature of a room and even cars based on this monopoly of a corporation that programmed him. He can later take control of other toys such as drones and bear toys for toy store massacre most gruesome.

From such limitless possibilities, Chucky would seem like a greater threat for controlling automated activities. Yet this potential only feels mildly tapped for all its greatness in such a film. Moreover, by the third act Chucky has pretty much become vindictive of Andy to want to hunt and kill him rather than be his best friend in a shift that seems too sudden. Slasher logic dictates that are hero must content with Chucky but there’s so much of a bond in their relationship that it turns toxic too quick to ever be anything more than the expected bout.

While not exactly shaking the boundaries of the killer doll horror story, the reboot of Child’s Play has just enough new tricks to both distance itself from its predecessor and stage some effective horror with kid protagonists. Still, like a piece of technology in its beta phase, there is quite a bit more that could be accomplished with such an intriguing retooling.