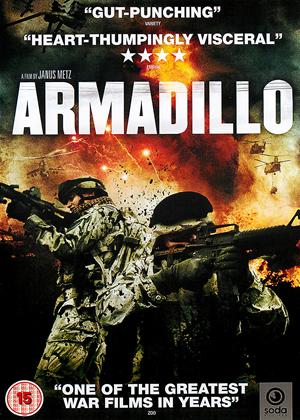 Synopsis:
Stationed on the Helmand frontline in Camp Armadillo, the platoon fights increasingly fierce battles with an enemy that is nearby but rarely seen. Metz captures life on the frontline with an uncompromising and intense vision, bearing witness to the realities of the combat zone. As the fighting intensifies, the effect of modern warfare is gradually realised as exhaustion, fear and adrenaline set in. Idealism meets paranoia in an authentic gun battle and decisions are made that can never be reversed. Gripping, thought provoking and visceral, this is as close as you get to battle action from the edge of your seat.
Actors:
Janus Metz Pedersen
Directors:
Janus Metz Pedersen
Writers:
Kasper Torsting
Studio:
Soda Pictures
Genres:
Documentary
Countries:
Denmark, Documentary

This is a documentary of some Danish soldiers who go to Afghanistan. It covers their decisions to go, the reaction of their families and then to moments of genuine conflict with genuine casualties. Not for the faint hearted. This is a real account of warfare for civilians. This is not a film this is a lesson in death.

This is quite a unique film in that it is a lengthy documentary, shot up to a point like a fiction movie, showing a unit of Danish soldiers (infantry) in the front line, against the Taliban, in Afghanistan, at the height of the involvement of NATO troops in Helmand Province, where British troops took so many casualties and fought so bravely.

On the plus side, it is a documentary like none other. It is amazing how close to the fighting the film crew are, and that they were allowed to film totally freely, from what we can see, to the point where the Danish soldiers discuss operations in a completely uncensored and raw way (with certain consequences down the line, as it happens). Nothing like this would ever be allowed in and by the British Army, I believe. You get to experience the war for what it is: a mixture of extreme boredom and extreme danger, with acts of heroism thrown in when duty calls, and all the ambiguity of modern warfare.

On the minus side, the film, being so factual and realistic -- because it is reality, to a large extent -- is strangely un-cinematic, and often lacks tension. This is probably what war really is like: 10% action and suspense, and 90% preparation, training, waiting around, and boredom. It affects the film, somehow. By the end of the unit's tour of duty, little has actually happened, but for the inevitable casualties (mostly IEDs), and the odd shoot-out.

Having said all this, I would recommend the film if one wants to have an idea of what really goes on in Afghanistan and what modern soldiering in far-away theatres such as the Middle East really is like. It may encourage potential recruits to join the army, or it may not, as the case may be...

Armadillo is a Danish language documentary film directed by Janus Metz Pedersen, about Danish solders in the Helmand province of Afghanistan. It begins with the solders final days in Denmark before heading on a six month tour at the Armadillo camp in Helmand. The film follows the group as they live in the middle of a war zone, following them on patrols and in the leisure time.

The first half of the film takes an innovative and emotional look into the lives and minds of the solders, giving many civilians their first chance to really see what life is like as a solider. It humanizes the conflict and is quite touching in many ways.

However the film takes a sour turn and disturbing scenes of warfare, including fleeing villagers and dead bodies, follow in the second act. The film raises questions about the morals or war and solders and in many ways dips into the heroism and ethics of war and those fighting on the front line.

The film has been criticized for glossing over some of the issues however, refusing the audience the chance to fully digest the meaning of the real images of dead bodies presented to them, as the film has a distinctly cinematic tone to it, which dilutes the gritty reality of it’s subject matter. As with any controversial subject matter there are many layered levels of understanding in Armadillo, which is where the confusion and controversy of the scenes is bred; particularly when visually the film is shot so perfectly that it is easy to become lost somewhere between the reality and cinematic fallacies one is used to.

However having said this, the film is still incredibly moving, harrowing and thought provoking. It includes discussions between the solders of the ethics behind their actions, along with touching scenes of their developing almost familial relationships with one another.

Awarded the Grand Prix de la Semaine de la Critique at the Cannes Film Festival in 2010 this is not an easy watch, however if you want to be challenged – mentally, emotionally and politically - by a movie then I suggest you look no further.