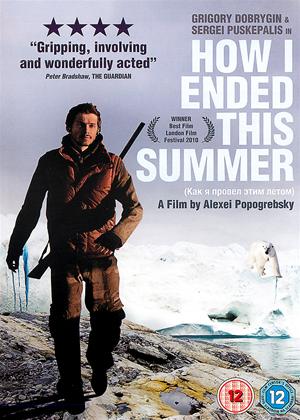 Synopsis:
The film is set on a remote weather station in the Arctic manned by old hand Sergei and the novice Pavel. When Pavel receives an important radio message, his fear of the older man prevents him telling Sergei the shocking news. From this deception, lies and suspicions poison relations between the two to such an extent that Pavel is in fear of his life, not just from the polar bears that roam the island, but from Sergei.
Actors:
Grigoriy Dobrygin, Sergey Puskepalis
Directors:
Aleksey Popogrebskiy
Producers:
Roman Borisevich, Aleksandr Kushaev
Voiced By:
Igor Chernevich, Artyom Tsukanov, Ilya Sobolev
Writers:
Aleksey Popogrebskiy
Others:
Grigori Dobrygin, Sergei Puskepalis
Aka:
Kak Ya Provyol Etim Letom
Studio:
New Wave Films
Genres:
Drama, Thrillers
Countries:
Russia, Drama, Thrillers
Awards:

Rent other films like How I Ended This Summer

Reviews (3) of How I Ended This Summer

Solaris in the snow! - How I Ended This Summer review by PV

I enjoyed this film. Yes, it's slow - so those who like shoot-em-ups and CGI-fests shouldn't bother. But anyone who likes the tension of Tarkovsky's Solaris (the original) or other tense, slow, spychological thrillers should watch it.

It's essentially a two-hander, about the mind-games between an older man and a younger one stationed in some awful artic monitoring station. Bleak landscapes, a sense of doom, and tense, unspoken drama really make this an interesting film for those will to stop fidgeting and fast-forwarding!

I found this thriller tenser then many in-yer-face Hollywood ones anyway. But you have to NOT expect a fast-paced thriller and let the tension blow like slow over the surface of the celluloid: then you'll enjoy it. I really was guessing what would happen right to the end - a good sign.

And it helps to understand Russian culture, history (of Siberia and the arctic), Nuclear issues there etc to fully enjoy this movie.

It could have been cut in places though, so 3.5 stars rounded up to 4.

Rivetting - How I Ended This Summer review by sc

I loved this film. A real film relying on imagery and sound to set the pace and ensure the tension. Yet another fantastic film from Russia. When I saw it was two hours long, I just hoped it would be interesting. The time just flew by.

I would also recommend The Return.

First rate acting from the two actors, but alas I found myself not totally absorbed as the action ground on. Even resorted to fast forwarding which is WRONG. A rather slow paced, extravagantly photographed tale.

How I Ended This Summer is a Russian language film about two very different men thrust into a strange and intense situation. The men, Sergei (Sergei Purskepalis) and his young partner Pavel (Grigory Dobrygn) are scientists based on a metrological station in the Artic, where harsh weather conditions and 24-hour daylight rule. Their job is to monitor their surroundings and take readings of the radioactive activity of the area. The film follows the two men as they struggle to understand one another, battles of age, priority and responsibility rage in the bleak winter sun of this movie.

The film’s plot shines enigmatically, though simple it is a truly human and emotional tale filled with beauty and tragedy, yet played out in an honest and simplistic manner. Whilst visually director, Aleksei Popogrebsky.

Uses the deft control of his camera and the harsh climate of the setting to mirror the emotional struggle of the two men of the polar station. Popogrebsky uses the camera and the soundtrack of the film to both isolate and integrate his characters from one another and into the audience, warm and uplifting music and stoic controlled camera work bring the two characters to life within the first minutes of the movie; and from that moment on you find yourself deeply touched by the sheer stamina and their determination to survive.

Not that this is a film filled with action, but rather that the strain of the climate and the relationship between the men prays heavily on both of them; threatening both their civility and sanity.

This is certainly not an easy film to watch, although for those who appreciate the more difficult and slow foreign films they will certainly find this a pleasure to watch.