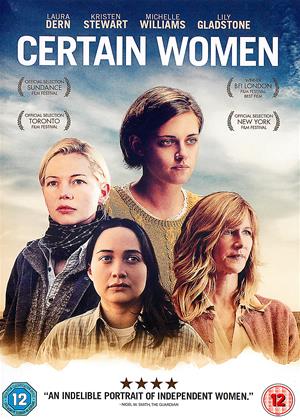 I was really pleased to receive this DVD. Had planned to catch Certain Women at the cinema, but that didn't work out. Have long dreamed of visiting Montana. This film poured cold water on that. Many scenes are at night, or in dimly lit spaces. It was hard to see what was going on. And we learn little about these women and their lives. Laura Dern's character is patient and compassionate, but seems wasted. Michelle William's role is a stronger woman, but what does she acheive? Then we have a lonely ranch hand and a young lawyer trying to earn a few bucks in a job that doesn't work out. How this got an award and a 100% rating beats me. Haven't seen a good film in a while. But that was Lion. Brilliant.

A beautifully crafted & acted film about everyday dramas in the lives of ordinary people - no less intensely felt for not being the stuff of headlines. Absorbing to watch, it reverberates long afterwards.

The good news is that the acting is first rate and there is no CGI.

If you can tune into Reichardt's wavelength, and allow yourself to slow down and match the pacing of her films, to explore her uses of landscape and the quiet moments of seeming irrelevance, a whole world and way of life open up to you. I won't say anything about the plot, or even the performances, which are magnificent. I will describe a single scene, not even a scene, just a moment, that i thing sums up Reichardt's powers as a filmmaker.

There is a moment where the camera starts at the counter between a diner's kitchen and the counter. We see, slightly obscured, a cook putting together a meal of burger and fries. We hear the clatter of equipment and sizzle of food. The cook moves the plate from the kitchen onto the counter, where it is picked up by the counter waitress, and then moved into the hand of another waitress, who fumbles with some cutlery in her hands. It then cuts, not yet to any character with whom we are familiar, but to a native American eating his food.

This sounds mundane, even dull, and it is. But because Reichardt has measured, so beautifully and with economy, the interior lives of the all the characters in these different stories, you cannot help but sense the interior lives of these people, too. The cook, the waitress, the other patron, all of whom share the strange, cold and epic landscape of Montana, feel like real people, in real places doing real things. In so many films, things feel staged and thus empty. A good enough representation of stuff, but ultimately flat. From Old Joy to Certain Women (and undoubtedly in First Cow, too) the full weight of humanity is felt in every single character. There seems to be nothing in her films that does not come with some deep truth attached to it.

For my money PTA, Malick and Reichardt are the three true American masters making films today.

First up, I have nothing again low budget films. Or indie feel films. Or slow paced films. But these three stories just aren't very interesting. They don't really go very far and there is zero action. I was going to give it one star but they are well acted for the most part. They are actually reasonably well written and filmed. But they don't make you smile or laugh or cry or think or hum or whistle or admire their beauty and you can't really relate to them. They are just dull.

Not much happens and this film didn't make me feel anything. I'm not opposed to ordinary people's stories, but this was dull. It is well acted and it's interesting to see parts of America we don't often see.

Definitely not for those wanting a gripping narrative.The slowness was testing at times, but I was happy to sink into the atmosphere. It portayed very well the air of quiet desperation that also underlies a lot of American short-story fiction, so that may or may not be your bag. Due to the quality of the acting I found the characters engaging and moving. Particularly nice to see Laura Dern back in the spotlight.

A total load of rubbish - Certain Women review by JG

To be fair, I tried to watch this for about an hour. After that, all I could do was to feel sorry for myself for having wasted 60 minutes of my life. I found impossible to follow and understand the whole thing. To make matters worse, the film is dark, incoherent and inconclusive. A real downer as I expected so much from Kristen Stewart.

I don't actually like writing a bad review but with other American 'Psychological' films, I was left disappointed. I wasn't expecting a Marvel like all boxes ticked ending or a cliff-hanger, but nothing was resolved. None of the plans made by the female characters moved forward or at least talked about the slightest hint of a next stage like I will earn more money by doing a second job or selling something to move on from the stagnant position of the drama. I'm a patient person and Laura Dern, Michelle Williams and Lily Gladstone gave earnest performances but I felt that Gladstone was not allowed to progress. I understand this might be a film concentrating on the 'Stillness of life' but life is peppered with moments of laughter, joy, anything.

It seemed to be a mono themed film.