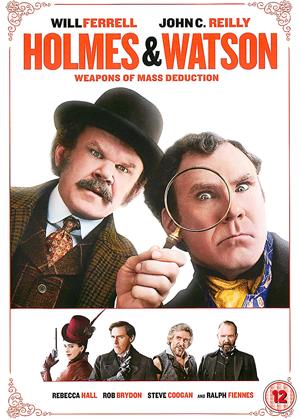 Reviews (11) of Holmes and Watson

Will can act. He can. However, he has to be kept well away from anything to do with the film that includes script. Another third form self indulgence, which has ruled most of his films really.

Step Brothers worked because he did have some discipline, and story line, and the two boys were dynamic without being totally OTT.

This, again, just explores all forms of human function, disfunction, and objectionable language and phrase.

After 20 minutes, where i hoped it may suddenly pick up......it didn't. So i help save the eco system by turning off.

Not usually so critical of a film, but when a golden opportunity has been thrown away, money wasted, and when Will is capable of doing quite good things, is a lemon.

So bad, utterly unfunny - Holmes and Watson review by SJ

Maybe the least funny film ever.

How the actors got through this, I don’t know. The audience will feel cheated, and we turned off after 20 excruciating minutes.

Looks like im the only person who enjoyed this! - Holmes and Watson review by JD

I found this film highly amusing. Yes its silly but by the same token i dont think its meant to be a documentary.

Much like many modern films if you leave your brain at the door its ok. Lets face it, the humour is better than the action is in most action films - which get much better reviews than this film does.

It mindless entertainment and isnt pretending to be anything more.

Laugh ... I didn't - Holmes and Watson review by RP

I tried hard to find a redeming quality about this movie, but after 30 minutes of attempting to view it, I gave up and turned over.

My only consolation was that I didn't pay to see it in the Cinema.

Just don't bother. It really was that bad. I even begrudge spending 100 charachters on this review. Yuk.

what happen here ??? there is nothing good from this movie im amazed the razzies didn't nominate this film

Utter rubbish I would take it off your lists!!

Like somebody else said don't bother using your electricity!!

I'm with JD on this! Hilarious Antics from John and Will! - Holmes and Watson review by trbp72

I am bolstering the people who like this movie by 2! Me and the wife love Will Ferrell and Step Brothers is a 'go-to' movie of ours...we cannot help but watch it when it is on TV or if we're feeling down...we stick the DVD on! So after seeing trailers for this we were excited...but missed it at the cinema, so rental was the next option...and wow! We weren't disappointed!

This movie is hilarious from the outset! Both Ferrell and Reilly hit the ground running with the same type of chemistry they exuded in Step Brothers...the supporting cast is also amazing...from Steve Coogan to Braun Strowman! This film just hits all the right funny bones! If you like Will Ferrell, you'll love this! If you don't like Will Ferrell...then why would you even rent it in the first place?! I mean there are people that think this film is funny...and there are others who are wrong!

Really don't understand why those reviewers giving it 1 star aren't amused by it?! Perhaps they were unaware of the Will Ferrell/John C. Reilly dynamic...or perhaps they just don't like puerile comedy?! It's the most fun I've had watching a Sherlock Holmes movie EVER! Would have happily watched this over and over...perhaps a purchase of it is in my very near future!

Please for all our sakes leave this one alone!! - Holmes and Watson review by SG

dont get me wrong i love both these actors.. i love big bang, zoolander, wreck it ralph,, red dwarf.. BUT this is thge worse drivel i have ever seen....

move on to the next one in your list.. as i wish i had done

Gave up watching after 10 minutes as it was rubbish and that's being polite! Normally I like Will Ferrell movies but this was awful!

What a dud! - Holmes and Watson review by TH

Can't disagree with the other reviews...this is far from Step Brothers territory. It's a take and a bit of a mickey take on Guy Ritchie's 'Sherlock Holmes'...the plot is pretty thin and the laughs few and far between. A lot of the dialogue between Farrell (Holmes) and Reilly (Watson) is sketchy and at times a bit too quick and incoherent to follow and usually ends with some unfunny slapstick moments or silly mimicking. I really wanted to like this but it just didn't get going, certainly disappointing considering Etan Cohen was directing. Give it a miss...

I recall being quite intrigued by the brief trailers for Holmes and Watson but there was a mystery afoot. Why did these ads arrive so late in December before its Christmas debut? And why was it debuting on Christmas Day? And why did the marketing seem so distant with everything besides the comedic talents of Will Ferrell and John C. Reilly teaming for the first time in a long time? And why release the film so close to Reilly’s more superior film of Stan and Ollie?

It’s elementary, dear reader. Consider the studio at hand. We know of Sony as a company struggling to land a proper film, that when they have something extraordinary on their hands as Spider-Man: Into the Spider-Verse they jump at the chance to patten the animation techniques, despite this not actually being a thing. We know of their comedies as being struggles, what with the executive meddling of the Ghostbusters reboot. And as someone who has weathered the current crop of comedies, improv is perhaps the most tricky of subgenres to master.

The players assembled appeared to be a calculative move. Both Ferrell and Reilly are no strangers to the improv comedy format, saving many loose concept comedies as Anchorman and Talladega Nights. You can see they haven’t lost most of that touch as they’ve been perfecting their duo bits over Funny or Die short videos. Ah, but there’s an aspect to this production that has been neglected. The director is none other than Etan Cohen, the very same director as Ferrell’s mediocre Kevin Hart buddy comedy, Get Hard, a forgettable comedy. This film is doomed to be just as much of a misfire but stick with me before it evaporates from your memory.

Cohen’s direction is all over the place in this farce. He has dressed up Ferrell and Reilly in period clothing and hopes they can turn in some interesting silly bits with what they’re given. But this concept requires a good director to know what works and what doesn’t. And Cohen seems to have been so pleased with the bit of trying to find so many descriptions of masturbation his laughter has clouded the flow of the film. Most frustrating is that Ferrell’s character has no direction. One moment he’s a semi-competent detective, the next he’s a blithering idiot who knows nothing of his line of work, believing he’s calculated enough to take a swing at a case of killer bees and not break it open. Spoiler: he breaks it open.

The plot is arbitrary. Someone is plotting to kill the Queen of England in a few days and it’s up to Holmes and Watson to crack the case. I shall omit the names of the supporting cast to protect their credibility for being so underused but take note of the Queen. Notice how her scenes seem strangely dubbed to the point that her lips do not match the words. One only half paying attention may not have noticed it, and I can’t blame you for being disinterested, but it’s a clear symptom of a troubled production. Indeed, there were problems.

Reshoots aplenty and sloppy editing are to blame, of course, but perhaps there wasn’t much thought going into this film’s very concept. And Sony was not unaware of these troubles. Further evidence reveals that testing for the picture proved to be so low that they tried to shove off the picture to Netflix, hoping the streaming service would buy it for a decent sum to recoup the losses. A smart move: Netflix had been known in 2018 to take The Cloverfield Paradox off of Paramount’s hands. But, to the studio’s shock, Netflix declined. Call it a busy schedule or higher standards but they weren’t interested. And so Sony shuffled the film in the 2018 schedule, pushing back from August to November before eventually arriving on the buried date of Christmas Day, hoping to surprise the audience with a comedy released on a day of dramas. Yet it only came in at #7 for the weekend that followed.

And that is the story of how Holmes and Watson came to be the most dismal comedy of 2018, not coherent enough to be fun to follow, not funny enough to overlook its flaws. Case closed.