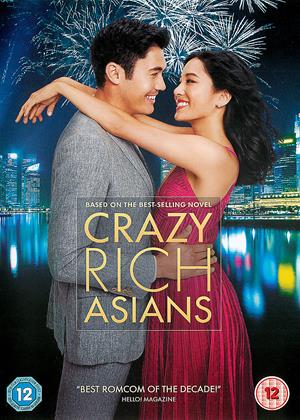 Given all the fuss that has been made about this film we were hugely disappointed. While all of its lead characters may be Asian - something embarrassingly rare in Hollywood movies - it needed to be more than a contribution towards representational politics to constitute a good film. There were slight variations and nuances on the traditional rom com - and if it is a put your brain on hold rom com you want then maybe give it a go - but this didn't do enough to make it an engaging watch.

My wife and I were disappointed with this film. It is not very involving and the characters are two dimensional. The settings were often spectacular but we didn't care enough about the characters or the plot. The final outcome was no surprise at all!

First thing to say is this film is NOT multicultural. White (and black) people are, in effect, BANNED from all scenes - even though MANY whites and blacks live and work in China. Can you imagine a UK/US film with parties with ONLY white people? Those who say this is progress are clearly very ignorant or misunderstand the whole point of FAIR representation. Ditto all-black movies.

This film starts with a disgustingly racist scene - racist against white British people that is. According to this race hate movie, a posh London hotel in 1995 would be entirely staffed by bigoted racist nasty-wasty white British men who'd be so racist as to try and turn away a rich Chinese family who had made a reservation. This is pure race hate - and a manufactured lie intended to stir up mockery and hatred of the British (who actually created the most successful part of China - Hong Kong!)

The facts: Hotels in London - yes, even in 1995 - are mostly staffed by foreigners. Posh hotel clients are mostly foreigners too and usually rich Arabs, Africans, Asians. EVEN a century ago, posh hotels welcomed ethnic foreigners from all over the world. The UK never EVER had race laws unlike the USA or indeed China, with it's racist Boxers. That is why Motown musicians have such fond memories of the UK from their early 60s tour - NO racial segregation here and NO blacks using back entrances.

After that disgusting race hate scene, I could not enjoy this movie - despite some funny set pieces. The fact it has a Chinese cast does NOT make racism OK. Ditto all black movies. Take not, Spike Lee.

The worship of ostentatious material wealth here is also stomach-churning. Made me realise why people in the Far East wanted to be communist actually.

And basically it's all a silly Mills and Boon drivel drama for teenage girls anyway.

I actually think the UK/US should now make a movie insulting China and showing Asians as racist bigots, just for the sake of balance.

No stars. In the trash.

3 out of 15 members found this review helpful.

Cliche upon cliche is piled up in this unfunny rom-com. With the exception of Michelle Yeoh, who is wasted here, the acting is poor, either wooden or OTT.

I wondered who this silly fairy tale is aimed at - perhaps teenage girls? But I think most young women of today would find the theme of the film retrogressive and patronising.

Too rich and not crazy enough! - Crazy Rich Asians review by TE

Dreadful, soapy sentimentality at its worst.

An uncritical portrait of self-centred rich people with no humour and no taste.

I was expecting a light, fantasy-world movie with some class, but this is just dull and predictable.

We sat down with high expectations of a good evenings entertainment. Sadly we were mistaken, the film was so dreadful that we only managed to watch 40 minutes before switching it off. The characters were paint by numbers not to mention very irritating - we were not impressed by all the money and obvious product placements. The plot was of a million other similar movies just nowhere near as good.

Having lived in Singapore during my working life the film had some resonance for me when it comes to the issue of children getting married and is the prospective husband or wife a suitable person for their offspring. Watchable yes, and the story line holds up but for me there was the added interest of seeing how much Singapore had changed since I last lived there.

American Chinese girl is in a relationship with the son of a high status mega rich Hong Kong Chinese family. Family disapproves and she gets batted about when she lands in the Hong Kong social and family swirl. Entertaining and light hearted, it has similarities to Brit Rom Coms without the ingenuity. Eye catching (particularly when a rich guy throws a birthday party on a container ship flying guests in by helicopter to be met by hundreds of bikini clad girls) and stylish it is pleasing on the eye without troubling your intelligence. Popcorn and beer entertainment, basically good fun. Enjoy.

Loved this movie, and to be honest I was not expecting too.

It’s different, very funny in places, but also sentimental. Screenplay and quality of acting are both first rate.

Some of the set pieces and locations are spectacular, and the story is way above your traditional romcon .

Elizabeth Bennet goes to Pemberly; only with Asians in Singapore.

Unfortunately it is not Clueless II (This time it's multicultural)

Yes its racist, corny and classist but sweet and funny in parts. Good to see Michelle Yeo as the awful mother

To label Crazy Rich Asians as a mere breezy romantic comedy with an Asian appeal would be a gross understatement. Here is a film that goes out of its way to be more than a familiar and standard path of guy meets girl with a judgemental family looming. Rarely do romantic comedy come looking so gorgeous, feeling so genuine, and unbelievably funny that the film is almost a throwback to the more decadent love stories of old Hollywood, where meaty stories came with a decadent dressing and infectious charm. It’s not just any date movie; it’s the ultimate date movie, delicious enough to entice even the most jaded towards the genre.

It all starts with the couple of Rachel Chu (Constance Wu) and Nick Young (Henry Golding) being such a genuine pair, she an American-Chinese and he an English-Chinese. They have an undeniable chemistry where it’s clear they’re destined to be together. Standing in their way, however, is Nick’s incredibly wealthy family. They essentially own Singapore and when their family has a wedding, it’s nothing short of the Royal Wedding in terms of theatrics. Rachel doesn’t know about this side of the Young family until she boards the plane bound for Singapore, noticing that Nick has access to first class. The Young family, however, is already well aware of Rachel before she even sets foot on the property, thanks to the snooping family members that gossip about whether or not Rachel is good for the young heir Nick.

Rachel is in for many surprises when she arrives in Singapore. The city itself is a dreamy wonderland of towering skyscrapers, vibrant lights, spacious venues, and the more irresistible of food. Even the airport astounds her for having an aquarium and a movie theater, a far cry from what she’s experienced at JFK. Nick’s family’s home is undeniably the grandest of locations in the country, existing as a golden kingdom with a wondrous garden of rare beauty. And yet the family still finds a way to one-up themselves with one of the most unforgettable wedding ceremonies, complete with grassy seats and an aisle of water for the bride to walk down.

The family is all smiles for Rachel, hiding their true feelings which only come out in whispers and closed doors. While the other girls seem accepting of her, she’s in for a rude bedroom present akin to The Godfather that make their distaste clear. More open with her disapproval is Nick’s strict and refined mother Eleanor Sung-Young (Michelle Yeoh), favoring tradition and family over personal passions. Not keen on the family line being spoiled by American traits, she does her best to gently push away Rachel. And once she does some more snooping into Rachel’s past, she begins to shove.

Helping Rachel find someone to confide in during this trip is her old college pal, the also wealthy Goh Peik Lin, played by a blonde-haired Awkwafina. She is far more than just a supporting role, eating every single scene she occupies with a spoon to be the breakout comedic hit of the movie. Consider that her father is played by the always Ken Jeong and she still manages to topple him for jokes and energy, despite Jeong’s funny line to his kids not eating their chicken nuggets; “There are starving people in America who don’t have any food.” Armed with over-the-top fashion, a rich Southern accent, and an electricity to her behavior that makes her the ultimate friend you’d want to go anywhere with.

Even when armed with more than enough beauty and hilarity to be a great time, Crazy Rich Asian becomes so much more with its unconventional storytelling with the generational and cultural divide. Rather than being a predictable path of Rachel and Nick deciding if they really want to be together, it’s more on Rachel to make the ultimate choice, deciding if its worth it to go against the wishes of Nick’s family to marry him. Nick’s onboard 100% and so it’s up to Rachel to make the tougher choices. And where other romantic comedies descend into harsh pranks and slapstick to get back at the judgy family, Rachel takes the high road of grace and kindness to be savage in her quest for love. All of this combines to make Crazy Rich Asians one of the best movies I’ve seen this summer and a romantic comedy destined to go down as a classic.