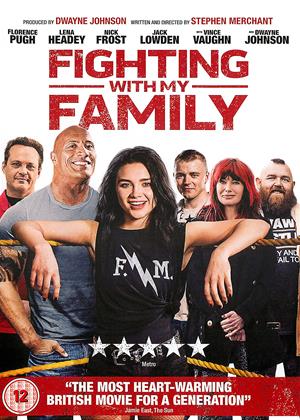 Reviews (9) of Fighting with My Family

Funny and Heartwarming - Fighting with My Family review by Spider

Yes, it’s hardly a groundbreaking format and it’s not short of a few cliches but the cast are brilliant and carry it off beautifully. One of the best films I’ve seen this year.

No originality here! - Fighting with My Family review by TE

Worth 1 extra star for the energetic performance by Florence Pugh, otherwise this film is a ragbag of every tired old cliche to be found in movies about sport.

Professional wrestling is so completely scripted and rigged that it hardly qualifies as sport. It is more like a clownish soap opera with acrobatics thrown in. This makes the triumphant ending quite bizarre. How can you celebrate someone "winning" when it has all been scripted and agreed in advance? That's showbiz I suppose!

This movie is a textbook example of how it doesn't matter at all what the movie is *about* - what matters is that you care about the characters and their story. I have absolutely zero interest in wrestling, and having watched Fighting with my Family, I still have zero interest - but I really REALLY loved this film! It was wry, funny, didn't take itself at all seriously, and successfully played the underdog card for all it was worth. In the climactic scene, I was rooting for Paige in the WWE Divas championship (whatever that is!) for all I was worth.

This is a feel good movie, and it made me feel very good indeed. Highly recommended.

This is one of the few films I failed to finish - got halfway through then ejected. Maybe because I HATE all the WWE wrestling nonsense - it bores me senseless. Maybe if I were a fan I'd think it was all CHAVTASTIC? Who knows.

Predictable film, with a few top lines - and Nick Frost always worth a watch, but Stephen Merchant always irritatingly smug.

The whole thing was also a bit depressing in a chavvy way - that people get so obsessed about this awful faked 'sport'. Lots of Norwich jokes - I wouldn't be happy if I were from there!

Lost interest. So 2 stars- 1 for a couple of funny lines (the one about Nazis in films made me laugh) and set-ups/scenes; 1 for Nick Frost.

Fight the good gymnastics - Fighting with My Family review by NC

Yet another loosely-based-on-fact film. They are the thing to do when run out of ideas, and actors need paying a few mill.

Pulls no punches, or does it? - Fighting with My Family review by DS

Stephen Marchant longtime collaborator with one Mr. Ricky Gervais has also carved a nice niche for himself in solo projects on TV and film. Here he tries his hand at feature-film directing and writing and it has to be said he appears to have learned a great deal from his years in the business and applied it.

He has crafted a film, that on paper would only appeal to dedicated fans to pro-wrestling, but skilfully and artfully made it a film about something else whilst not losing the focus on the wrestling. With a great cast, I even enjoyed the much maligned Vince Vaughn who for some reason has become a bit of hate-figure recently, he is ably assisted in this funny and entertaining story of love, family, pursuing your dreams and redemption.

No doubt Mr. Merchant was helped no end by the quite fantastic Florence Pugh and Jack Lowden who are wholly believable as brother and sister. Throw into the mix Nick Frost playing a part of a real person who was seemingly made for him to play and Leana Headly throwing off her Cersei mantel with some ease as the determined family lynch-pin Julia and frankly, even with a poor script and story, you would still get something watchable. With a great script and mostly true story you are onto a winner. Fighting With My Family is undoubtedly a winner.

Bringing in all of this under two hours and you have a fun, interesting and entertaining film. Throw in ‘The Rock’ with his charisma and worldwide recognition and you are going to the championship belt with some ease.

If the film lags or loses momentum anywhere it is that part where you can almost see the fingerprints of the WWE. Throughout the film it is made clear the Saraya/Paige and her family run scripted wrestling events, yes I know people get genuinely hurt in these and they are difficult and athletic but they are scripted and staged, once we get into the world of the WWE, the apex of the families dreams, there is the implication that the bouts are spontaneous. This is nonsense, there has been a court case where it has to be admitted, it does not harm the product and it is still as fun. It’s a shame this part could not be as adult as the rest of the film.

Fighting With My Family is good old underdog fights their way to the top, learns a lot about their family and life in the process and wins against all odds story and as an added bonus it is 90% a true story.

In all honesty just over 90 minutes with Saraya and her family is as pleasant a way to spend some spare time you have.

Unexpected Joy - Fighting with My Family review by AL

Stephen Merchant really is a versatile chap, who can turn his hand to anything. Didn't really have any interest in wrestling, but that didn't matter, sorry was compelling, even if a little predictable. But enjoyable to watch and could happily rewatch again sometime.

Easy but rewarding viewing - Fighting with My Family review by ck

What a relief to find a film that is based on real events that is an uplifting experience to watch, fantastic acting such that the predictable storyline becomes the films strength, it is more about the journey than the destination . The fact that the subject matter is wrestling matters not one jot.

The juxtaposition between the grimy and hard life lived in Norwich and the American training camps and the glamour of the USA wrestling circuit is well portrayed. Overall a very satisfying film to watch it it it a film we can all relate to , not to taxing mentally or emotionally but if you like a film similar to Bend it like Beckham you will like this I will be amazed if you are not a Paige fan by the end.

Boring. - Fighting with My Family review by CC

I don’t think I asked for this dvd and it was somehow sent to me. This is one of the boring films. It tells the story of how a girl became a wwe champ. It’s meant to be a true story. True story films are rubbish and boring.

Fighting with My Family review by Mark McPherson - Cinema Paradiso

It may come as a surprise that a film about the rise of a wrestler from amateur to WWE professional has a sincerity for family and dreams. And yet it doesn’t. Having heard so many horror stories about how the WWE underpays its wrestlers and makes greedy business calls that leave their most prized assets destitute, of course, a dream-come-true film about being a wrestler within their organization would be seen with the same dreamy qualities of a light sports drama. This is a true story all about one woman’s dreams coming true. What happens after is never answered. Just enjoy the spectacle of her finally getting her shot at Wrestlemania.

If you can distance yourself from the harsh reality, the chipper one in this film has its moments. Saraya "Paige" Knight (Florence Pugh) has grown up in a family that has always idolized wrestling. Her brother, Zak "Zodiac" Knight (Jack Lowden), has been more about wrestling than she has but she still learns to appreciate the thrill of the sport. Their parents are Julia "Sweet Saraya" Knight (Lena Headey) and Patrick "Rowdy Ricky" Knight (Nick Frost), having gone from street criminals to struggling gym managers. They could really use a big boost for thier gym when Paige and Zodiac have become adults. And it just so happens the WWE is coming to Australia for tryouts, the perfect opportunity for the brother and sister to show they’ve got the right stuff for the top-televised ring in the world.

What follows is the story of the tough road to the top. Paige is accepted into the smaller league of the NXT, well on her way to the WWE. Her brother, however, is left behind. She gives the selector (Vince Vaughn) a plea that if she goes her brother goes as well. The selector isn’t interested in him. Try as Zodiac might, he is constantly denied into the ring as the only thing he believes he can do has been stripped away from him. He’s also a new dad and feels as though his life is over. What a tough life.

While there’s somberness at home, there’s tension in the ring as Paige struggles to make a name for herself. She goes through the standard emotions of the underdog striving to prove herself. She’ll approach the wrestling training and league with determination but is also easily intimidated. She finds herself at her lowest believing she can’t cut it in the big leagues. Perhaps a little inspiration from her family to remind herself there’s a lot on the line here will either stress her out or inspire her to move forward.

The WWE is depicted in this film as being marvelous and whimsical, where entering its ranks to become a toy product is a dream come true. A few wrestlers appear in the film and, for being showcased on a program all about performances, they give stiff and winkish performances. There’s even a guest spot of Dwayne Johnson returning for some WWE antics and even when he explodes on Paige and Zodiac for constantly bothering him, he’s more likely to give them loud pep talks than doses of truth. There’s a very brief, blink-and-you’ll-miss-it moment where Paige has her doubts about heading into the ring once she’s reached the big time. Will she turn back for the troubling road of fame that follows? Of course not! Not when there’s a happy ending to be had as she wins her first battle on WWE.

Don’t get me wrong; Fighting With My Family certainly has some character charm to its familiar tale. I wanted to root for the eccentric family, especially when they breathe an awkward air around the slightly uncomfortable Stephen Merchant. Like as with any rise-to-the-top sports picture, you really have to distance yourself from the system to appreciate the person, a feat that’s not as easy with how much vivid placement the WWE receives in this picture. It’s an inspiring tale dampened by blatant commercial branding.