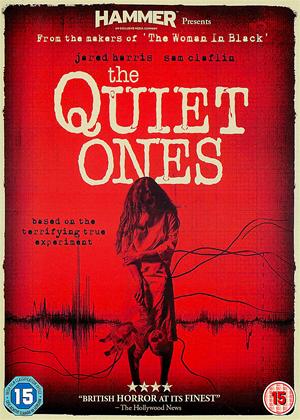 Reviews (1) of The Quiet Ones

Dull. - The Quiet Ones review by none

I enjoy almost all films - but this was an exception. Very dull. Lousy acting. Atrocious plot. Not even good for daft escapism. Don't bother.

The Quiet Ones review by George Hooper - Cinema Paradiso

While its fun to watch period horror as it harks back to the horror of yesteryear while employing all the benefits today has to offer while also designing some beautiful sets, it’s also incredibly noticeable when said horror film uses that periods techniques in oddly similar ways in the search for a quick scare. While the frights may still be there, the sense of dread is much less pronounced and in The Quiet Ones there is nothing else to fill that void.

The film follows Professor Joseph Coupland (Jared Harris), a professor who with the help of his students decides to carry out an experiment on a young girl to study her. However during the course of the experiment dark forces emerge that put everyone involved at risk as Joseph and his students must try and find the answers so that they can escape this nightmare they have created.

While the visual wonders of The Quiet Ones are entertaining and more than a little shocking, in the temporary sense, there is little here in terms of genuine intrigue, the kind of wonder that makes most horror films more than a simple frightfest. Even the recent The Banshee Chapter had a strong story to dig into despite the cheap elements of the films production. The Quiet Ones looks lavish but in a way feels soulless, a film without purpose beyond scares and beautiful scenery.

While Harris seems to enjoy the abject power of Coupland, the professor controlling the experiment while controlling his students at the same time under the guise of protecting them from the force that has overwhelmed them. He loves the character and by extension the audience will too but he carries the burden of the film and co stars like Erin RIchards and Sam Claflin do not fill the gaps in the ways they ultimately should.