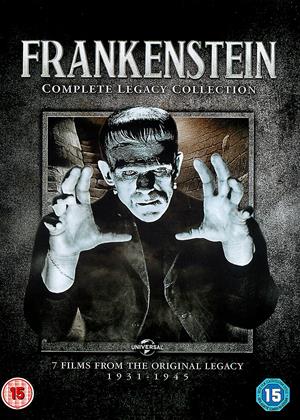 Cinemadiso's 1930s in Films Vol. 2
19 films by cinemadiso
Christopher Chiu-Tabet's Favourites
355 films by christopher-chiu-tabet
Frankie's 1001 Movies You Must See Before You Die
982 films by frankie

Reviews (1) of Bride of Frankenstein

The greatest ever horror film? - Bride of Frankenstein review by NP

It is difficult to imagine the impact the first talking Frankenstein film had back in 1931. Sound was still new at the cinema, and much was made of it to creepy effect in that original. It had eclipsed Bela Lugosi’s Dracula and made a star out of Boris Karloff. Yet it took four years for Universal to produce a sequel.

When I first read the reviews of the Bride of Frankenstein, it horrified me that mentions were made of the Monster talking, smoking and getting drunk and the line of black humour that set this film apart from its predecessor. Surely they hadn’t made the Monster into a comedy character? All this was a long time ago, of course, and this became my favourite film (both horror or otherwise) very soon after.

The Monster’s voice is soft and fragile, his scenes with the blind hermit (which is where the ‘getting drunk’ tag came from) are his only moments of lightness amidst otherwise unrelenting misery, where he is used by the other star of the film, Dr Praetorious for his villainous experiments.

It’s astonishing that director James Whale would never helm another horror film after this, and that his fame was soon to fade away. Having had to be convinced of the merits of producing a sequel to Frankenstein, he injects this story with both moments from the original novel and others from his imagination, lending a twisted perversity to proceedings which propel the film further into weirdness. Praetorious is a delight, manipulating the exhausted Dr Frankenstein and toasting a world of ‘Gods and monsters’ whilst dining at an open coffin.

Of the performers, only Valerie Hobson lapses into the kind of theatrics that her on-screen husband played by Colin Clive manages to (just) avoid. Incredible to think she was only 17 years of age when recording this.

William Pratt, or Boris Karloff, exceeds his earlier performance, even if the new variation on his monster make-up (burnt away hair and additional scarring) isn’t quite as effective as the cadaverous, sunken-eyed original. And as for The Bride (played by ‘??’ in the closing credits) … well! A streak of white electricity through the shock-beehive and fresh scarring under the jaw combine with the wide eyed beauty of Elsa Lanchester to create something truly unique, both seductive and frightening. The scenes between the new husband and wife are macabre, bizarre and heart-breaking. What a typically twisted idea to have Lanchester also playing Mary Shelley herself at the film’s opening. The creator becomes the created!